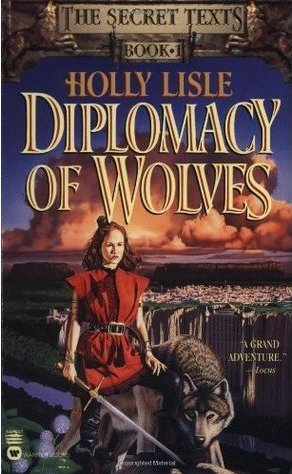 A Heroic Fantasy series of three books by Holly Lisle (Diplomacy of Wolves, Vengeance of Dragons, and Courage of Falcons), and a Prequel, Vincalis the Agitator.

Once upon a time, The Empire of Hars Ticlarim was a place of beauty. The world of Matrin was run on magic. There were underwater cities, cool airships, and floating cities.

All powered by a gazillion billion jillion forsaken people. But Utopia Justifies the Means, right?

Vincalis the Agitator is what happens when a few people (and a deity) decide to stop this process...leading to The End of the World as We Know It.

The trilogy takes place a thousand years later, where most people have been Scarred into looking like very random animal mixes via magic, Magic Is Evil (but some still do it anyway), Fantastic Racism abounds, and the souls of the Dragons from the first book are trying to take over the world again. But this time there's a secret society dedicated to stopping them, and a prophesied Messiah is supposed to come and save them all...