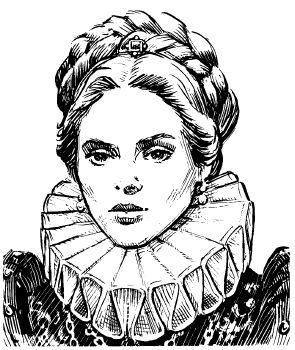 When not even a diamond necklace will show your status as effectively.
"They did not call out to the crowd, but rather chattered and gossiped among themselves, teasing one another and cooling themselves with fans, their stiff ruffled collars moving only slightly in the breeze."
— This Isn't What it Looks Like
Advertisement:

A ruff is a frilly, circular collar that was very popular in Western Europe. It was invented some time in the mid-1500s and reached its peak in the early 1600s before disappearing around the Thirty Years' War. Back then, they were mainly worn by upper-class individuals. Because said individuals were the only ones rich enough to hire artists, you see the trademark collar in so many portraits from that era. They tend to vary in widthnote The largest ones had a width of a foot or more and needed a wire frame to support them and thickness, but they are always pleated fabric collars. They are usually depicted in whitenote  Actual ruffs were often dyed in pastel colors, and Elizabeth I went so far as to ban blue ruffs as part of her sumptuary laws., although other colors, such as black or red, might appear in monochromatic costumes or on the Queen of Hearts.

There's a reason why only the wealthiest were able to wear one (at first, that is, but we'll get to that soon): Every time a ruff was washed, some servant had to break out the starch and the goffering iron

and press each back-and-forth curve. In other words, it was quite a hassle, and all for a mere accessory. It would seem that those wearing the ruffs valued them highly.

It should be noted that the nobles weren't the only ones who wore ruffs. As they were becoming popular among the nobles, they were also being picked up by people who associated with them: Servants, priests, and especially performers. This is why Shakespearean actors are commonly portrayed wearing ruffs. However, it seems that none had taken as much of a liking to the ruff as clowns had. Once the Court Jester began wearing one, it became a standard feature of clown costumes and remains so to this day, long after ruffs fell out of fashion with the upper class.

As a result of their Real Life popularity, or maybe just because they look a little silly (especially big, wide ones!), these collars are fairly common in the media. If a fictional monarch is wearing one, then this is likely to become a subtrope of Requisite Royal Regalia. However, this trope can still apply even if the character isn't aristocratic. Perhaps he or she serves an aristocrat. Perhaps he or she isn't an aristocrat but aspires to become one. Maybe he or she just has a bad case of Small Name, Big Ego. Either way, all a ruff-wearer has to do to count as an example is to be - or act - powerful.

Although the ones wearing the ruffs will most likely find them fashionable, most others will find them ridiculous. As a result, ruffs in fiction are just as likely to be Played for Laughs as they are to be Played Straight. Someone wearing a ruff may easily end up being Mistaken for Clown when they're trying to be fashionable.

How the ruff is portrayed - in illustrated or animated works, that is - tends to vary. Some artists go to the trouble of drawing all the details to create a realistically pleated collar. A simpler way out is to just draw a thick disk with a wavy line along the side.

Compare High Collar of Doom and Mystical High Collar, a different kind of collar which only covers the back (and sometimes the sides) of the neck. Classy Cravat is similar. The wearer may possibly be Collared by Fashion.