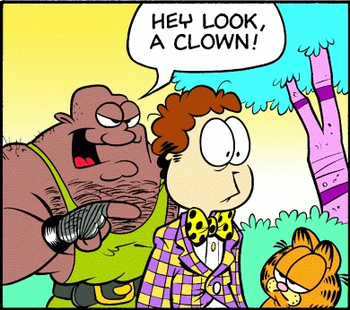 A character wears a flamboyant outfit (and sometimes heavy makeup), sometimes out of a misguided sense of fashion, sometimes due to circumstances out of their control. Another person thinks they are a clown or something similar. The person being called a clown may react in various ways. They may get furious at this perceived insult, they may just be annoyed, or they may be embarrassed.
Advertisement:

The person calling them a clown may be Innocently Insensitive, or sometimes an actual Jerkass. What the "clown" is wearing may be an example of Impossibly Tacky Clothing, Fashion-Victim Villain, or Uncanny Valley Makeup.

Starting in the late 2010s, it's become common to call people "clowns" whenever they do or say something that people consider stupid, especially online. This is not the same thing. The person being called a clown has to have something (usually wardrobe/appearance) that can genuinely cause someone to think they're a clown. Even if the person calling them a clown knows that they aren't a clown and is using the term maliciously, there has to be a bigger reason than the "clown" simply being stupid.

Compare Stripper/Cop Confusion for a more risqué variant, and Dreaded Kids' Party Entertainer Job to see why being a clown is so undesirable. See also Your Costume Needs Work, Mistaken for Subculture, and For Halloween, I Am Going as Myself.