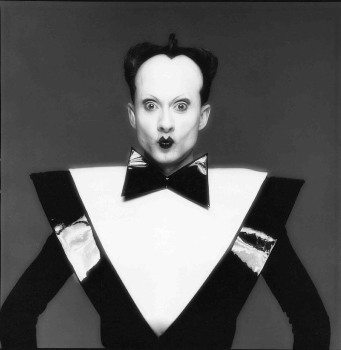 Klaus Nomi (born Klaus Sperber, January 24, 1944 – August 6, 1983) was a falsetto New Wave cover singer, performance artist, and pastry chef who rose to fame in the 1970's. Raised in Germany (and coming from outer space), he started out singing operatic arias in vaudeville shows before becoming one of the most lauded New Wave talents of the era. Sadly, he became a victim of Executive Meddling, and eventually lost control over most of his music. Even more tragic was his early death at age 39 from AIDS, being one of the first celebrities to die from the disease.

He cited Elvis Presley and Maria Callas as his biggest influences, and it shows — his cover songs are a delicate balance between rock and opera, with a strong New Wave vibe. He appeared on Urgh! A Music War. where he performed his Signature Song, "Total Eclipse

" (which was covered by Nina Hagen). He also worked with David Bowie (as a backup singer for Bowie's first Saturday Night Live appearance in 1979), and they inspired each other's wardrobes for a short while.

Klaus Nomi still has a massive fanbase, and is considered by many to be one of New Wave's most defining and unique voices.

The only person to even come close to his brand of "post-modern theatricality" is Lady Gaga, who cites him as an influence. It shows.

The works of Klaus Nomi contain examples of the following tropes: