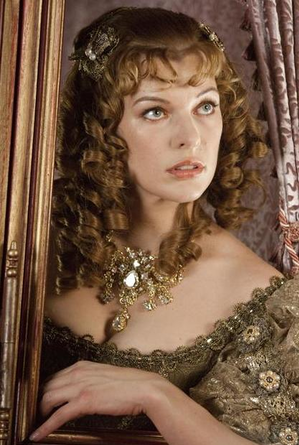 Also known as drill hair, corkscrew curls, sausage curls, and tube curls, ringlets are a hairstyle which a woman creates by wrapping her hair tightly around a vertical curling iron or rollers.
Advertisement:

Ringlets date to ancient Rome, where they were a popular hairstyle among the aristocracy. That regal feel is still retained today, and when chosen for a character, they indicate that she is upper class or an aristocrat, or at least sees herself that way. This makes it a subtle type of Ermine Cape Effect.

The hairstyle is also time-consuming to create and difficult to maintain, indicating that the wearer is concerned with her appearance and is very feminine. It's also usually a youthful style, rarely appearing on women older than middle age.

A Super-Trope to Ojou Ringlets, where a high-class character has two curls in front of or directly behind the ear. A Sister Trope to Prim and Proper Bun.