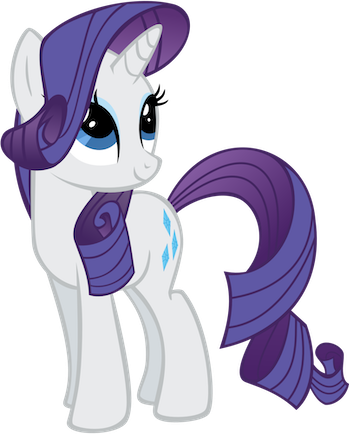 Not just another Jane Doe

The bearer of the Element of Generosity. A unicorn with an eye for fashion and a generous spirit, Rarity is a beautiful clotheshorse. A huge fan of Fairy Tale-style romances and Happily Ever Afters. While there's nothing new about a girl's cartoon having a fashion-focused character, Rarity breaks from this stereotype in that instead of following trends, she creates them as the owner and lead designer of Ponyville's premier dress shop: the Carousel Boutique. As of Season 4, she appears to be diversifying into interior design. Her Pillar of Old Equestria is Mistmane.

Rarity has a self-demonstrating page.