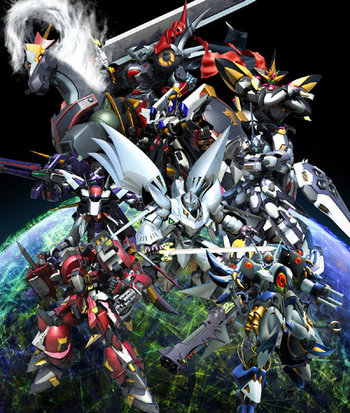 ROCK ALRIGHT! WE'LL FLY HIGHER THAN ANYONE IN THIS ETERNAL SKY! ROCK ALRIGHT! LET'S BREAK THROUGH SPACE AND TIME AT MAX SPEED! THIS IS OUR BURNING SAGA!

One fine day in Japan, the Super Robot Wars division of Banpresto pondered the following: "Hey, our Massive Multiplayer Crossover-type Humongous Mecha franchise has developed quite the roster of original characters. What say, instead of paying out the licensing fees for Gundam, Macross, Mazinger Z, Getter Robo and the like for this year's game, we build it around our in-house characters and robots instead, and make it like a traditional installment, unlike the one Winkysoft did back then?"

Thus was born Super Robot Wars Original Generation: featuring a couple dozen original pilots created from Super Robot Wars Alpha and prior (but strangely no characters from Masou Kishin aside from Masaki Andoh, Lune Zoldark and Shu Shirakawa, although that's all the first Alpha title ever offered), its plot involves the "Divine Crusaders War" from Super Robot Wars 2 and the initial stages of the "Ze Balmary Empire" invasion in Alpha, but without all those other distractions provided by the "Angels", "Zentraedi", "Space Terrible Monster Crowd", and so forth (the "United Colony Corps" plays the role of the "Principality of Zeon"). But wait: "didn't Alpha have all sorts of corrupt politicians and enemy pilots to impede the heroes Banpresto hasn't made an Expy of yet?" Well, yes, and they exist now - a good third or so of the Original Generation cast is comprised of these sorts of people (and a couple of the heroes, even) created exclusively for these games. What, thought this series excluded itself from having its OWN original characters? Please.

For more details about the games included in this sub-series, head to the main page where it's folded neatly there.

On December 2020, a complete translation of the first two games' compilation on PlayStation 2 has been released.

See here for the massive character sheet on all the originals.

Tropes pertaining to multiple characters and the entirety of Super Robot Wars Original Generation are: