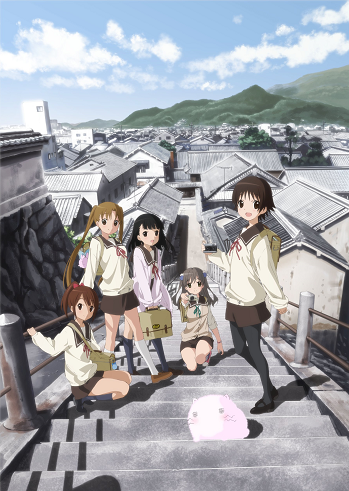 "Everyone will eventually go their separate ways. That's why I want to preserve this precious moment now."
— Fū Sawatari
Advertisement:

Tamayura is an OVA directed by Junichi Sato (known for his work on other Slice of Life series, including ARIA and Croisée in a Foreign Labyrinth) and was originally released across two Blu-Ray and DVD volumes in later 2010. In October 2011, the TV series, titled Tamayura ~Hitotose~, began airing. The second season is titled Tamayura ~More Aggressive~ and aired in July 2013. A four-part movie, Tamayura: Sotsugyō Shashin, was released between April 2015 and 2016. These films follow the girls' final year of high school, concluding the story with their graduation.

The story is focused around a young girl named Fū Sawatari, who moves to Takehara, Hiroshima to begin her first year of high school. Her deceased father grew up in Takehara, and this is her first time back in the town in five years. Fū enjoys photography and is often engrossed with taking pictures with her father's old Rollei 35S film camera. Despite being a shy girl, Fū tries her best to make friends and is spurred on by Kaoru Hanawa, a girl with a self-proclaimed scent fetish. She quickly befriends two other girls, Maon Sakurada, who whistles all the time, and Norie Okazaki, who loves baking.

Together with her friends, Fū begins capturing the moments they spend together on camera, and learn of the "tamayura" phenomenon, which manifests as little specks of light that appear in photos whenever the people depicted within are happy.