In General
Super Robot Wars 4 introduces a mechanic to the series wherein the protagonist is highly customizable. While players cannot change every facet of them visually, they can select between eight pre-set "appearances", four per gender, and assign a personality to them that influences what they say and how they interact with others in the game. Each appearance also has a "default" character profile attached to it, if players doesn't want to fiddle with a bunch of options and want to jump straight into the game. Irm and Ring are taken from these profiles and expanded into full characters for Super Robot Wars: Original Generation.

Worth noting is only Irm and Ring have been adapted to date: unlike the Super Robot Wars Alpha originals, where all eight of them are fleshed out for Original Generation, the other six profiles in 4 have never been seen outside of 4 and its related products, which explains why the other entries are so comparatively barren. 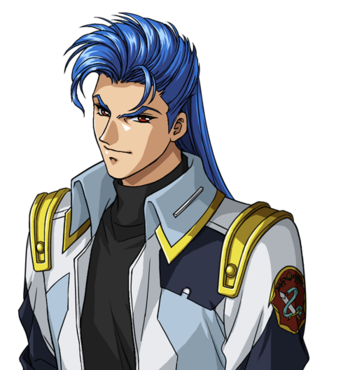 Voiced by: Kenyuu Horiuchi
"You may have the skill... but I'm better looking!"

Irmgard Kazahara is the son of Jonathan Kazahara, a prolific mechanical designer at the "Tesla-Leicht Institute". A mechanical designer himself, Irm is known more in Original Generation as the pilot of the Transforming Super Robot "Grungust". His easy-going, ladies man attitude hides his competence as a skilled Ace Pilot.

Irm is a slightly different person in Alpha and Original Generation compared to his debut appearance due to Mythology Gag: in these games, he enters the plot as an older, veteran pilot rather than the point-of-view rookie he was during his debut. In 4, he is the default archetype of the "intellectual Handsome Lech" and this carries over into his future appearances, except it's informed by at least one very messy breakup and quite a lot more actual experience with the opposite sex. Across all appearances, Irm is paired with the cool, nihilistic Ring Mao, who in 4 is a bit of a Tsundere for him, and in other settings, is his ex-girlfriend. Despite being technically estranged from one another, the way they bicker Like an Old Married Couple makes it clear they still care for one another, and when they can actually put aside their differences, they make quite a team. 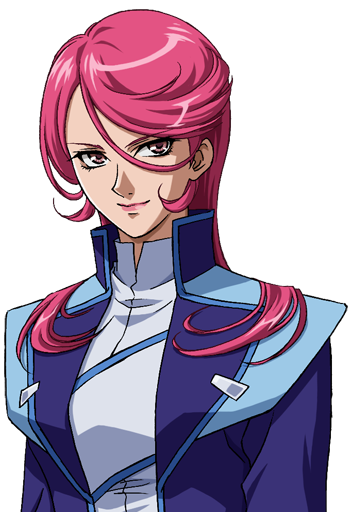 Ring Mao is one of the eight selectable originals and represents the "cool & nihilistic" archetype. In Alpha and Original Generation, she's portrayed as the Chief Executive Officer of "Mao Industries", a Humongous Mecha manufacturing company and developer located at "Cerevis City" on the moon, but can easily transition back into the seat of the Gundam-like "Huckebein" and take names in defense of her company. She has a rocky relationship with Irm: in their 4 incarnation, although close, she hates his constant flirting; for her Alpha/Original Generation counterpart, it's clear Irm crossed a line at some point in the backstory and she left him, leaving the two distant, though they still work great as a team when needed and, deep down, trust each other. 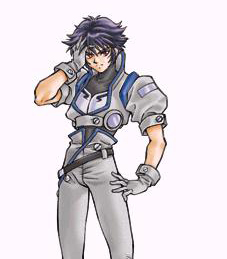 The "Hot-Blooded, serious yet friendly" male archetype, Jayce apparently likes bonsai and is quite gentle beneath all that HotBloodedness. He is also the first character to invent the famous "Gespenst Kick" (inspired with Benkei Kuruma learning the Daisetsuzan Oroshi), later used and popularized by Original Generation via the "Gespenst MK II Type-S". He is, by default, paired with Mina Likering. 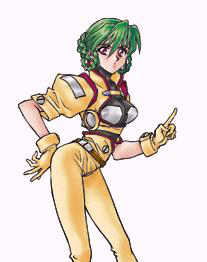 Voiced by: Noriko Hidaka
The "slightly oddball" choice among the female pilots, Mina is by default paired with Jayce.
Hector Madison 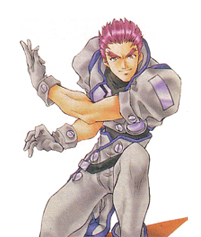 Voiced by: Ryuzou Ishino
The "slightly oddball" choice among the male pilots, Hector is by default paired with Pat.
Patricia "Pat" Hackman 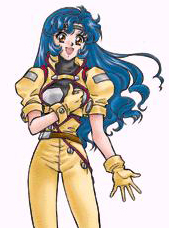 Patricia is, more or less, the Distaff Counterpart of Lenonjayce in 4, and represents the "hot-blooded and friendly" archetype for the ladies. Compared to the usually calm Jayce, Patricia is a completely hyperactive, enthusiastic girl, and is especially devoted to making sure Justice Will Prevail. Paired with oddball Hector Madison, Patricia is the one who invents the "Gespenst Punch", which doesn't get copied word-for-word, but might as well be today's better known technique called "Jet Magnum" in Original Generation. 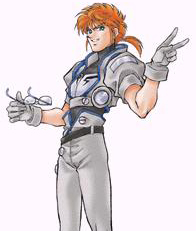 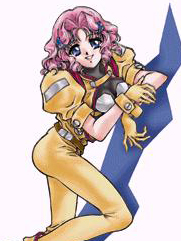 The father of Lune Zoldark, Bian Zoldark is a brilliant scientist who, upon researching alien technology found on Earth and given to his institute to investigate, begins building a secret rebellion called the "Divine Crusaders" (DC). Gathering military and political figures across the world, Bian publicly declares war on The Federation and his army heads to extreme lengths to crush the government in the "Divine Crusaders War", believing Bian's words are a sign to Take Over the World. In his appearance for Super Robot Wars 2, Bian ultimately faces off with the gathered heroes representing the Federation and fights them at DC headquarters on "Aidoneus Island", proclaiming the ones who emerge victorious shall decide the fate of their world. He is killed in combat, but his legacy has resounding effects for the rest of the "Classic Timeline".

In Original Generation, Bian's role in the story is expanded, where he forms the "Extra-Over Technology Institute" (EOTI) as a response to researching alien technology for Earth's benefit (mainly due to the arrival of Meteor-3 near Aidoneous Island in the South Pacific). It's through Bian's research the mysterious material known as Tronium is discovered in the meteor, with Bian handing over 4 of the 5 useable samples to the Earth Federation Army. At the same time, Bian is slowly forming the DC in secret, recruiting help from many individuals such as Shu Shirakawa and Lune, his good friend Maier von Branstein and his son Elzam and Sanger Zonvolt. Like Super Robot Wars 2, Bian either faces the crew of the Hagane or Hiryu Custom battleship in Original Generation and dies at DC headquarters on Aidoneus Island. In contrast, his Alpha counterpart is alive; in fact, Bian's words are taken seriously because of the events from Gunbuster and Super Dimension Fortress Macross hovering above the Earth.

Bian creates and pilots the "Valsion" as his personal machine and creates a second unit he modifies for Lune, based off of the Valsion, called "Valsione"; in Original Generation, the latter features a prototype of the "Direct Motion Link System" that would be found in another line of Super Robots, the "Dynamic General Guardians" (DGG). A member of the Divine Crusaders, Thomas Platt played a minor role in the Divine Crusaders War in Super Robot Wars 2, but manages to evade capture by Federation forces long enough to get transported to the subterranean world of "La Gias". Thomas joins the "Republic of Bagonia" and its military, and has several encounters with Masaki Andoh and his companions during The Lord of Elemental storyline. Thomas also appears in Super Robot Wars EX, still part of the Bagonian military, as well as an antagonist towards the heroes.

In Original Generation, Thomas begins like his Classic Timeline counterpart as a commander in the DC. One of his subordinates is nervous recruit Ryoto. In their first mission, Thomas uses Ryoto as a decoy to smuggle a bomb (hidden in Ryoto's "Lion F") that would destroy the Hagane. The plan's foiled, and has a great effect on Ryoto's view of the DC, causing him to defect. Thomas participates in the final defense of Aidoneous Island and continues on up until the final attack on Federation headquarters in Geneva, Switzerland. He realizes the DC's going down the tubes and decides he's had enough. In Original Generations, Thomas somehow manages to conceal his involvement with the Divine Crusaders and is serving as a soldier in the Earth Federation Army.

In General
The Zuvorg Alliance is the primary antagonist of the Classic Timeline, encompassing a huge galactic conglomerate of worlds acting as supervisors to the galaxy, seeing which planet turns out to be a threat to the universe and eliminate them. Amongst them are the "Inspectors" (Wendolo, Mekibos, Vigagi, Sikalog and Aguija) and the "Guests", led by Teniquette Zezenan. Unfortunately, while most of them are sane, extremists like Wendolo and Teniquette turn out to be far worse, irredeemable enemies of mankind.

In Original Generation, the nature of the Zuvorg Alliance is expanded: largely an aristocracy, many members are part of clans/houses in the Alliance. The Zuvorg Council, meanwhile, is split into two distinct factions: the "Volga", who governs the Inspectors, and the "Zogar", whom the Guests belong to.

Tropes regarding the Zuvorg Alliance and multiple characters: Leader of the Zuvorg Alliance's Inspectors, Wendolo is ordered by the Zuvorg Council to investigate the Earthlings' activities and if need be, subjugate them. In Original Generation 2, after he and the Inspectors successfully gain control of the White Star, setting up their primary base of operations there, Wendolo sends his forces to disable the Earth Federation Army's military. Wendolo always has a sly, yet sinister smile on his face. Regardless of who it is, be it ally or foe, he shows no mercy. One of the Inspectors sent to Earth, the arrogant Vigagi views Earthlings as nothing but "barbarians", insisting their actions are a threat to galactic peace, and their future expansion into the cosmos a potential danger to the Zuvorg Alliance. In Original Generation 2, Vigagi quickly seizes control of the Tesla-Leicht Institute, but is unable to prevent Sanger and Ratsel from acquiring their new units hidden beneath the installation and is forced to retreat. Vigagi is tasked to defend the Inspector-occupied "Moon Cradle", but is killed in combat by the Hiryu Custom and its crew. 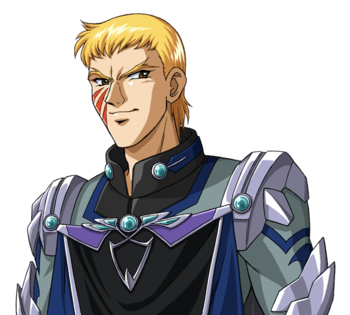 Another of the five Inspectors sent to Earth, the cool-headed, taciturn and reasonable Mekibos hastily destroyed Earth Federation forces at the White Star and helped establishes their command base in Original Generation 2 at the "North American Langley Base" of the Earth Federation Army. He also leads the attack on the Moon Cradle and Mao Industries, with hopes to gain the "Huckebein MK III" for Inspector use. The only non-speaking Inspector, Sikalog is the lover of Aguija and is usually seen with her. Along with Mekibos, Sikalog assists in capturing the White Star in Original Generation 2, making his final stand inside the installation. The sole female Inspector, the hot-headed and loud Aguija despises anyone calling her "old", despite being in her twenties. With her "darling" Sikalog in Original Generation 2, she and Inspector forces occupy the White Star. Aguija later gives chase to the members of "Project Terrestrial Dream" after they flee the Tesla-Leicht Institute, but is pushed back by the "Cybuster" and "Astelion". Aguija is killed in the defense of the White Star as Federation forces move to drive the Inspectors away from Earth. 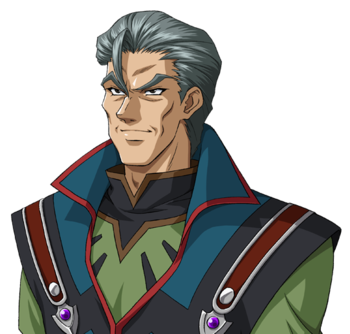 A member of the Zuvorg Council and leader of the Guests (a term code-named by the Earth Federation), a special force sent to inspect and control planets. Unlike most Zuvorg members, Zezenan's prejudiced against the Earthlings, viewing them as nothing more than a collection of apes. While supposedly kind to his subordinates, he mainly sees his soldiers as disposable tools. 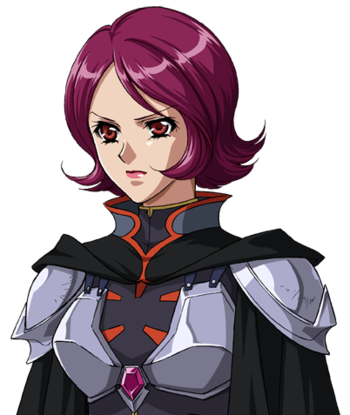 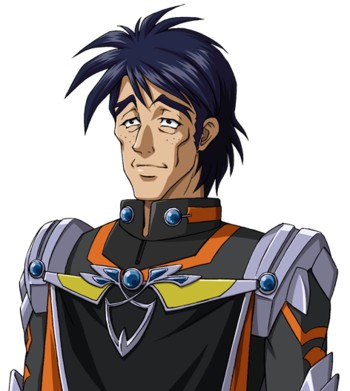 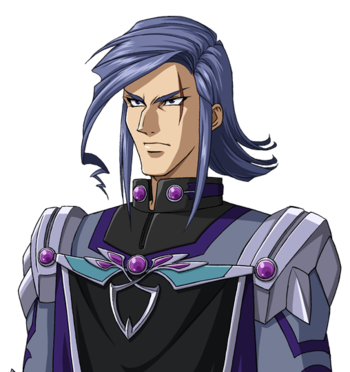