This page includes only those characters who make their debut in Endless Frontier. See the Xenosaga character sheet for KOS-MOS, T-elos and M.O.M.O, see Namco × Capcom for tropes regarding Reiji Arisu, Xiaomu, Saya, Dokugozu, Dokumezu, and Katana and see the main Super Robot Wars page for those from the main Continuity. 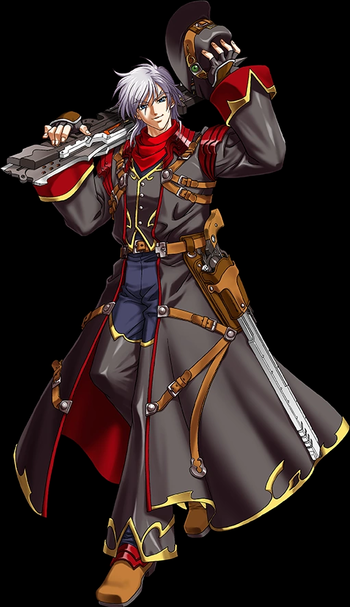 The protagonist of Endless Frontier, 23-year old Haken Browning is captain of the dimension-traveling vehicle Zeit Krokodil (German for "Time Crocodile") and a Bounty Hunter throughout the "Endless Frontier", a set of small, multiple worlds inter-dimensionally connected via "Cross Gates". He is faithfully followed by his Sidekick Aschen Brodel. Haken fancies himself as a ladies' man, complimenting everyone of the fairer sex, with a very easy-going personality. Despite having a color scheme akin to Sanger Zonvolt and the surname to Excellen Browning, Haken is an Expy of Kyosuke Nanbu, taking on the role of the calm, cool leader with a gambling habit, even naming most of his attacks after gambling stints ("Texas Hold'em", "High Low Draw", etc.).

Sometime after Project X Zone, Haken and Aschen show Sanger the way home, using the same transporter he appeared from in the Endless Frontier, but a malfunction accidentally send him and Aschen into the Original Generation universe with Sanger, just as the world of the New A.D. finds itself in conflict with the Fury, Gadisword, and the remnants forces of Dark Brain. Without a functional Cross Gate around to return to the Endless Frontier, Haken relegates staying with the "Steel Dragon Battle Group" temporarily. Fortunately, he is put to good use as Doctor Marion Radom by chance had already completed a custom Gespenst using salvaged blueprints from the "Shadow-Mirror", giving it to Haken for use.

In his Endless Frontier and Project X Zone appearances, Haken carries two weapons with him at all times: the "Night Fowl" assault rifle and the "Longtomb Special" revolver. In The Moon Dwellers, he becomes the primary pilot of the "Gespenst Haken", complete with weapons similar to the Night Fowl.

The young princess of the Nanbu Clan in the world of Kagura Amahara, Kaguya's the heiress of the sword-fighting style Jinraku Tengen. In her first meeting with Haken, she unknowingly hires him and Aschen to escort her on her pilgrimage. Throughout her travels in the Endless Frontier, her relationship with Haken grows more forward. Although she carries Kyosuke's surname, Kaguya is more of a loose Expy of Excellen, since her personality is similar to her: innocent, playful and the one to provide the most Fanservice (not that she tries to invoke it, unlike Excellen). She also has more Sanger references than Haken, starting from her sword Goushiki Zankantou ("Type-5 Colossal Blade") to her styling herself as "The Sword That Cleaves Evil", including Sanger's trademark CHEESTOOOOOO!!!.

Kaguya reappears in Project X Zone as Haken's partner for the game. 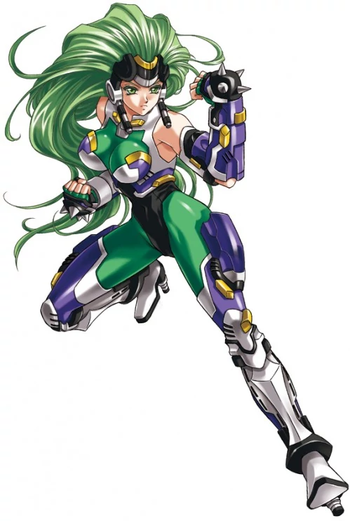 "I will write something insulting on that billboard you call a chest."
Voiced by: Kaori Shimizu

Haken's loyal and devoted Robot Girl Sidekick, Aschen Brodel's a green-haired combat Cyborg capable of emitting human-like emotions. At first, one would think she's a blatant Expy of Lamia Loveless, but it's justified: Aschen's, in fact, her predecessor (to a lesser extent, "older sister") codenamed "W-07". She and Lemon's other W-Numbers 01 through 10 were the first to be sent to the Original Generation universe during an attack by Beowulf, but they were put in the first batch of the teleportation device the Shadow-Mirror had built, namely the unstable ones. Aschen stumbled into the Endless Frontier and has been there for the past twenty-three years.

Unlike Lamia who's mostly The Stoic by default, Aschen has a sharp tongue and at times flings insults, especially regarding Haken's womanizing attitude, and invents other derisive In Series Nicknames like "Dairy Cow Princess" or "Princess Flat" (for Suzuka). Aschen's also installed with "Code: DTD" (Dust-to-Dust), but instead of it being a Chekhov's Gun with regards to Lamia, she uses it for full advantage as a Super Mode, but with a side-effect of turning her personality into a Genki Girl.

Being a combat Cyborg, she doesn't need a weapon: she fights with bare hands and feet (although the rest of her body carries an assortment of weapons like disk cutters, missiles and shotguns mounted to her heels). Aschen doesn't appear anywhere else except her home series; however, she and Haken are pulled into Sanger's dimension following a transporter malfunction for The Moon Dwellers. Although she doesn't get her own Humongous Mecha like Haken does, Aschen provides combat support as the designated co-pilot of the Gespenst Haken. 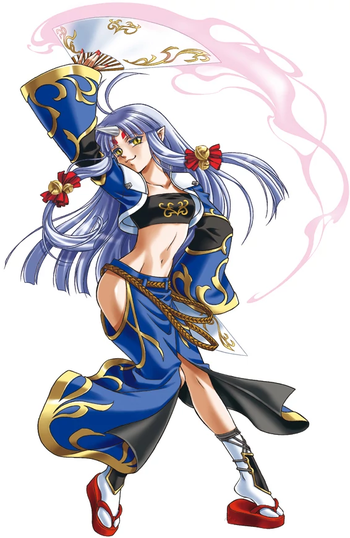 A "Shiki-Oni" princess from Kagura Amahara, Princess Suzuka is Kaguya's Childhood Friend and is betrothed to another Oni named Shuten, bumping into Haken and his party and joining them in their endeavors throughout the Endless Frontier. Suzuka uses an unusual style of dance for combat that lets her command a mecha (just about as tall as the other mecha found in the game) called the "Jyaki-GUN-Oh" (Devil Gun King). As far as beauty goes, Haken calls her a "Midriff Beauty", but Aschen dubs her "Princess Flat" (with good reason). 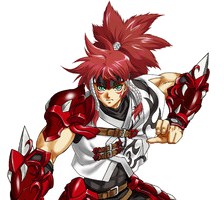 Protagonist for the sequel Endless Frontier EXCEED, Aledy Naash's a warrior of the "Shura" sent by his mentor Cindy Bird to investigate the new emergence of "Mild Kiel" crystals in the newly reformed Endless Frontier, as well as the missing machine "Ark-On". He's assisted by the lost princess of Elfetale Neige Hausen.

Despite being a Shura and a practioner of Kishin Ken, there is no establishing link between Aledy and the Shura who appear in Original Generation Gaiden. Coupled with the surname "Naash", neither is there any indication he's related to Alkaid Nassh. 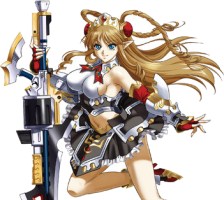 Female protagonist of EXCEED, Neige Hausen's a 117-year old princess of the fairies in the Elfetale Kingdom, which was destroyed sometime before the first Endless Frontier, now accompanying Aledy in his quest. 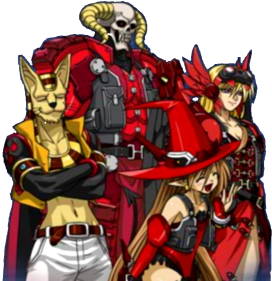 The elite unit of "Formido Heim", the world that invaded Elfetale and caused the "Ten Year War" which ended once they offered a ceasefire, members of the Orchestral Army include Token Mini-Moe/Tagalong Kid Black Magician Girl Kyon Feulion, black-winged Valkyrie Ladyof War Henne Valkyria and skull-headed axe-wielding leader Ezel Granada . Utilizing various hi-tech equipment like Laser Blades and combat robots, they roam around Elfetale and cause the Cross Gates that connects between worlds to be unstable.

In EXCEED, they aid the main party as support members. Aschen, having been given an offer to join by Henne at the end of the first game, is one of its members.

In General
The denizens of the world of "Elfetale" are largely comprised of talking animals, elves and fairies. They were the primary targets during the Ten Year War with Formido Heim and thus, were hit the hardest. A majority of the elves fled the onslaught, taking refuge with the Shura.
Dorothy Mistral 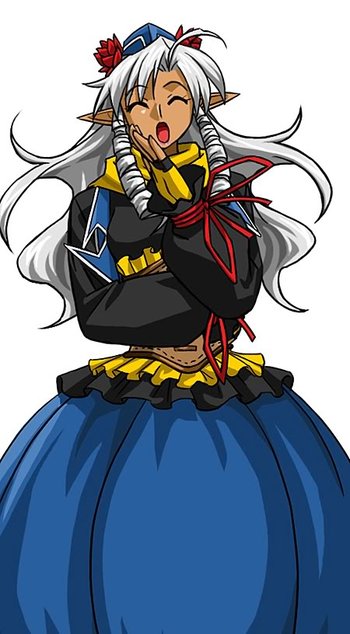 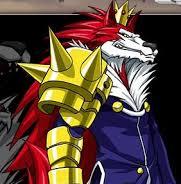 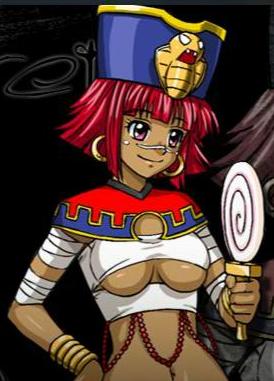 An Egyptian-themed lamia, Cleo operates a bakery called "Fatty Hansel" with a noticeable sweet tooth who bakes delicious sweets. Although she makes her debut in EXCEED, she was in the background of the first game: apparently, Cleo resides under the Cross Gate lying deep within the "Dulces Tomb". 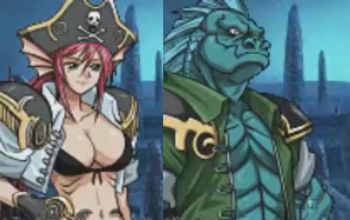 In General
The people of the world of "Kagura Amahara" live primarily in three places: under the World Tree "Fujisakura", in the frontier town of "Ryugu Island" and in the Oni-occupied "Megi Castle". During the Ten Year War, they secluded themselves from Elfetale by closing the Cross Gates that allow access to their world.
Sanuki Nanbu 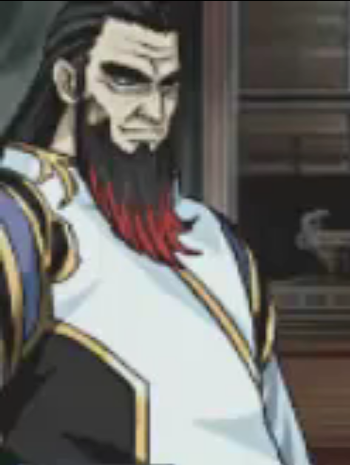 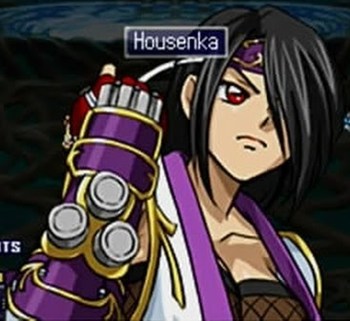 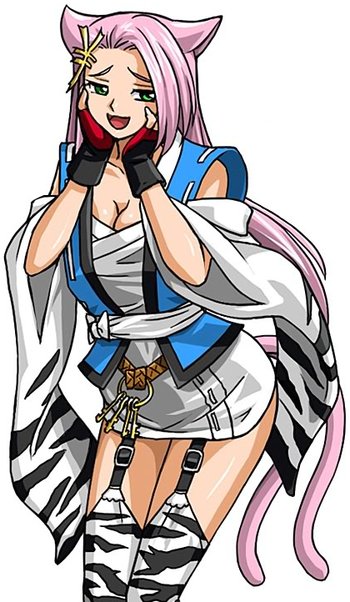 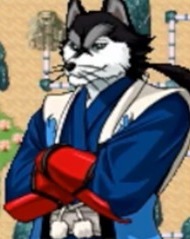 Shuten, King of the Shiki-Oni 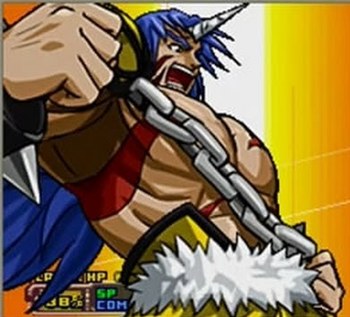 In General
The Shura are a fight happy Proud Warrior Race who originated from a world they called "Hakoku", nicknamed "The Land of Waves". They were in the middle of a war with another race until their sudden transfer to the Endless Frontier. Shura politics are one of the three guiding forces moving the story in Endless Frontier EXCEED.
Cindy Bird 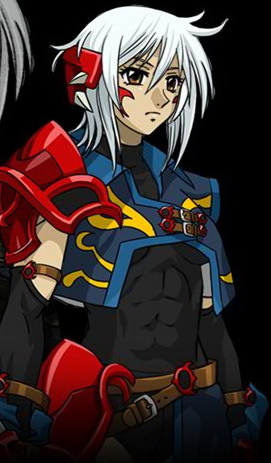 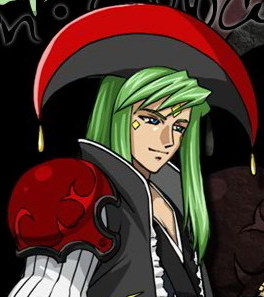 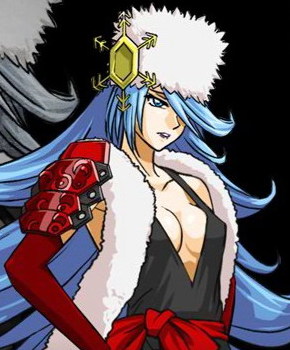 In General
One of the driving forces behind the events of EXCEED and the main antagonists of the game, the world of "Agrado Heim" were at war with the Shura of Hakoku, with several of their members being familiar with Aledy or one of the other Shura generals. Though they share similarities with the denizens of Formido Heim, Agrado Heim itself looks like a giant Space Station.
Gagun Laos
Voiced by: Kenichi Ono
Lok Eye 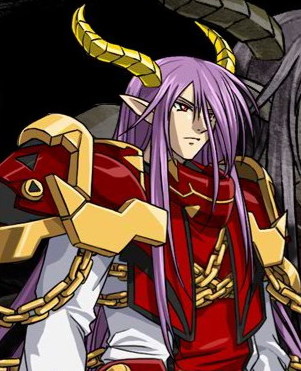 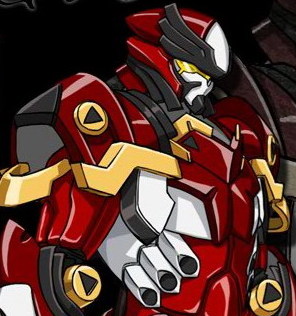 Its members include Vanar Gand, Hela Gand, Jorm Gand. How they classify as "siblings" despite being entirely different species is a mystery.

In General
One of the driving forces behind both games, they are the same-named faction from the main series. One of the Shadow-Mirror's Neverland-class battleships broke in two during a dimensional jump, with the front and rear parts landing in Formido Heim and Lost Herencia, respectively. Their commander androids, the W-Numbers, are key characters in all games.

Of the eleven W-Numbers that are known in Endless Frontier, five are still unaccounted for.

Pete Pain is a W-Number designed to eliminate other W-Numbers, tasked with "clean up" and ensure any sensitive information does not fall into enemy hands. He uses a unique command "Code: PTP" (Play The Puppet) that overrides the programming of other W-Numbers. Throughout EXCEED, Pete rebuilds various mecha destroyed from the first game to help him with his mission. 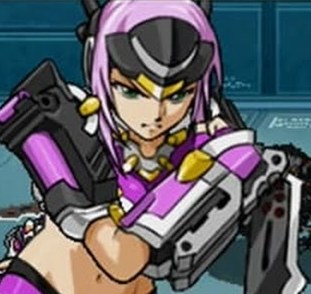 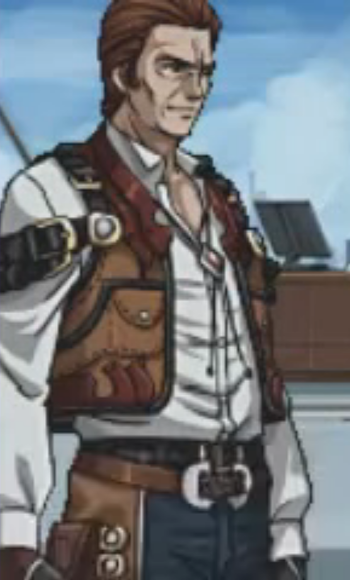 Crew of the Zeit Krokodil 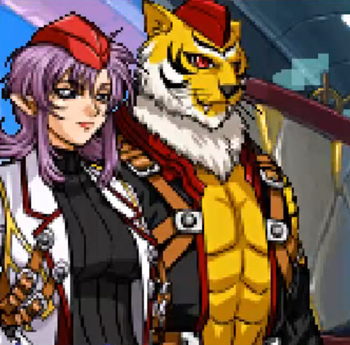 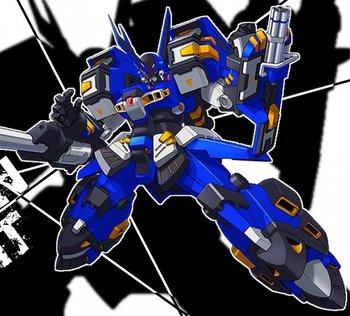 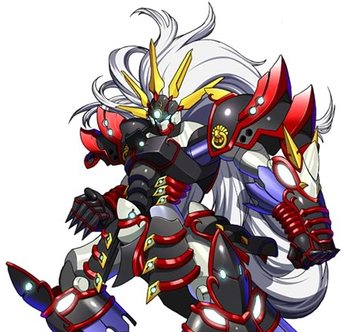 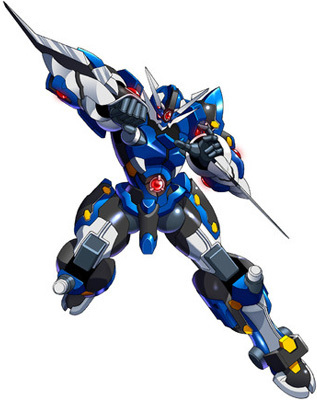 One of the four robots created by Formido Heim, the Arkgain has been wandering throughout the Endless Frontier. Since its construction is more similar to an android than other mecha, Haken believes it is W-00. 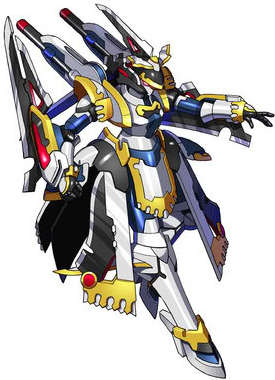 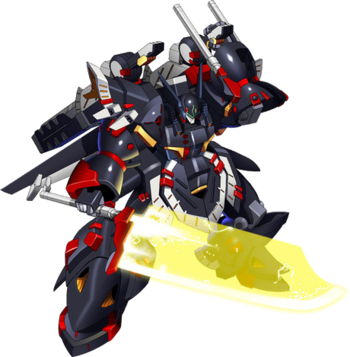 Usually just called "Phantom", this is another of the four robots created by Formido Heim. Using data found in the "Tinkerbell" supercomputer of the Neverland battleship, Cardia restores the Phantom's original programming after encountering it, assigning it to work alongside her. After being defeated by Haken (whom the Phantom designates as its primary user), it forcibly shuts itself down, allowing the party to capture it. When the Nacht and Abend malfunction following an encounter with Haken's party in Varna Kanai, the Phantom automatically inserts its programming into them, converting both machines to serve Haken and his allies. The Phantom follows Haken faithfully and by the start of EXCEED, is the only robot that still accompanies him (whereas the Nacht and Abend have mysteriously disappeared). 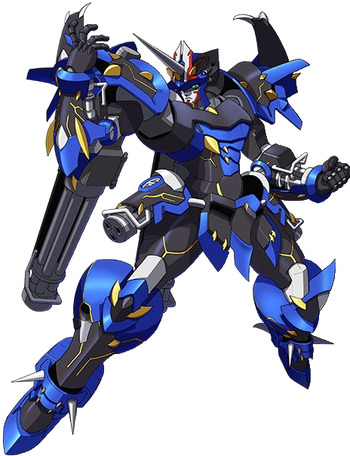 A karakuri used by Suzuka as a weapon, unlike the other robots listed here, it is more or less a puppet controlled by strings attached to Suzuka's Paper Fan of Doom, thus not a true robot, despite its Super Robot design. Notably, the Jyaki-GUN-Oh is designated as a Choukijin ("Super Mechanical God"), the same classification of machines as the "RyuKoOh"/"KoRyuOh". 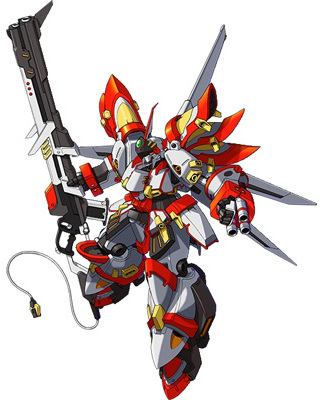 Due to the nature of the following character(s), spoilers are unmarked to avoid redundancy.

The true Big Bad of the first game, the Einst are the same entities from the main series, the source of all conflict that occurred in the Endless Frontier. When the overambitious king of Formido Heim attempted to explore a recently opened Cross Gate, he returned possessed by the Einst; this impostor started the Ten Year War of genocide with Elfetale. The Einst also possessed three machines that accompanied him: the Nacht, the Abend and the Arkgain.