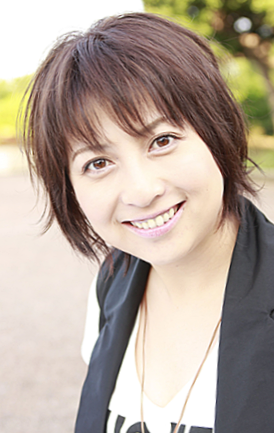 Kaori Shimizu (born May 21, 1983) is a versatile voice actress that for some reason tends to avoid the spotlight. She rarely appears in hit shows, and if she does, she doesn't do their main protagonist (except for her debut). However, most of the characters she has voiced are recognized as great characters and mostly well liked. Basically, this translates to cult status as a voice-over actress. She currently seems to be pigeonholed into calm, cool, stoic characters, mostly with tender sides that pop up time to time, but can also be found voicing roles at the opposite end of that spectrum. She has also done Nightmare Fuel and debuted as Lain, but the one role that has probably shot her to fame is Signum.

She announced her marriage with...an ordinary man with no links with voice-acting industry in December 2017.

Despite being not quite so well known, she has quite a relationship with Mamiko Noto, as she has the dubious honor of being "the only one to closely mimic Mamiko's voice." She also seems to be good friend with fellow voice-over actor Kana Ueda, who had their roles kind of reversed in between Magical Girl Lyrical Nanoha and Haruka Nogizaka's Secret. She also has been cast together with Marina Inoue. Hitomi Nabatame refers to her as "Wife #3."