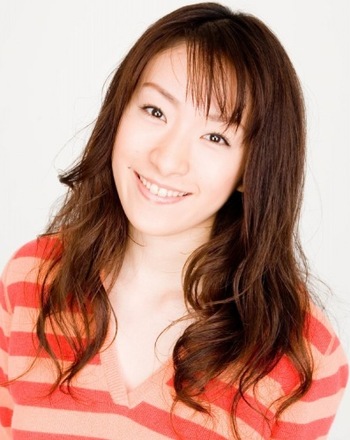 One of the up and coming rising seiyuus in the business. Kana Ueda (born June 9, 1980) has a high forte, cheery and upbeat voice, but she can soften it whenever necessary, so either she gets a teenage girl (possibly Tsundere) role or a Loli role (or both, in the case of Rachel Alucard). At first gaining notice as Rin Tohsaka, she continued to build up her record from then on. She also sings.

She's a friend of Kaori Shimizu and has several occasions of working together in the same series. She's also Shizuka Itō's drinking buddy. Oh, and she's not related with another veteran seiyuu named Yuji Ueda.

and despite being Japanese... she owns an Xbox 360 (even though that system doesn't do well in Japan!) and loves Halo 3. Apparently Microsoft got a wind of her liking to that Microsoft held an event where online Halo 3 players got to meet her online and also fight against her. She's said to be a good player, but of course some people managed to frag her anyway. She's also one of the seiyuu from the Fate series who also plays the Fate/Grand Order mobile game... though, she did not seem to know about Master skills

(a very basic combat feature) until she had been playing the game for months. Needless to say, fans couldn't help but make a few seiyuu jokes comparing her to Rin.

She also recently participated in EVO 2016 in the Mobile Suit Gundam Extreme Vs. Full Boost tournament, and her team placed third. Her team placed fifth in the 2017 AnimEVO tournament.

KNEEL BEFORE US!
You can take a bath first. I'm cooking our dinner meal.