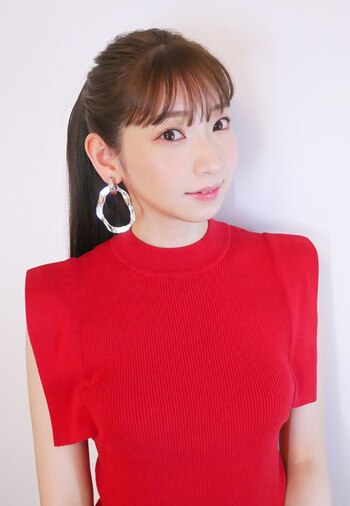 Marina Inoue (born January 20, 1985 in Tokyo, Japan) is a voice actress and singer from Tokyo. She is signed onto Sony Music Japan's Aniplex division. As for her voice acting career, she's employed by Sigma Seven. She is 162 cm tall and has AB-type blood. Notable for being able to play girls with deep, coarse, almost masculine voices very well; in fact, she became a voice actress so she could play the male roles she did in the drama club at her all-girl high school.

Inoue made her debut as a voice actor and singer after she was chosen out of 2000 people from the "Gonna be a star" auditions (hosted by Sony Music Japan) for the title role in the OVA Le Portrait de Petite Cossette.

She is one of those rare talented voice actors who can draw very well, and provides eye-catches for some of the anime she has a voice role in, including the ending artwork for episode 22 of Zegapain.

She happened to be a cosplayer and model, too, before and after she entered the voice acting industry.

Not to be confused with the American tattoo artist Marina Inoue. Also, she has no blood relation to fellow voice actors Kazuhiko Inoue, the late Makio Inoue, Go Inoue, the late You Inoue or Kikuko Inoue.

"This article didn't have an equal number of black and blue words! And "blue" was a Red Link back there! And then Permanent Red Link Club is in blue! These things drive me crazy!"
Feedback