Playable Characters (in order of appearance)

Shion is the iron-willed but fairly ditzy head of Vector Industries First R&D Division's KOS-MOS project. She is the character around whom most of the events of the games revolve. She is the main protagonist of the series. 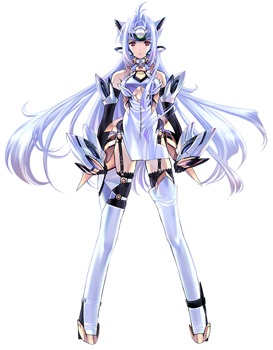 KOS-MOS is an android built by Shion and Kevin Winicott in order to battle and destroy the Gnosis threat. She can use UMN transport to manifest absurdly powerful weapons. She is capable of generating the Hilbert effect (which draws Gnosis into Real space so they can be fought) at a range wider than even 100-series Realians can do with an amplifier. Her inner workings are described as a black box, and she sometimes acts in ways that go outside her programming.

chaos is a very mysterious young man working aboard the tramp freighter Elsa. He seems to have connections to Jr. and Jin that date back decades. He also has some sort of connection to KOS-MOS as well as the Testaments and Wilhelm. He can destroy Gnosis with a touch.

Voiced by: Masashi Ebara in Japanese and Richard Epcar (games) and Jason Douglas (anime) in English.

Ziggurat 8, dubbed "Ziggy" by MOMO, was a police man named Jan Sauer in life. He committed suicide after losing his wife and child and was resurrected as a cyborg. He was hired to rescue MOMO from the U-TIC organization. He seeks to have all the organic parts of his brain replaced with machines so he can finally die. Eventually becomes a father figure to MOMO.

MOMO is the prototype 100-series Realian (a type of organic android) who is widely sought after for the data her "father," Joachim Mizrahi, left inside her. She regards council member Juli Mizrahi as her mother and is visibly distressed when her mother doesn't want anything to do with her. She has the appearance of a 12-year-old girl.

Voiced by: Erika Kawasaki in Japanese and Brianne Siddall (games) and Greg Ayres (anime) in English.

A gung-ho young man who commands the starship Durandal. He is second in command of the powerful Kukai Foundation, although his exact relationship to the owner, Gaignun, is the matter of some speculation. His weapon of choice is antique dual pistols. 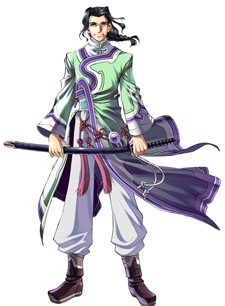 Shion's brother, a slacker who abandoned medical practice shortly after completing his training and bounces from obsession to obsession. He currently runs a book shop full of actual paper books, which baffles and infuriates Shion. He has a history with chaos, and was deeply involved with the incident on Old Miltia that led to it being sealed away.

A mysterious girl who appears before Shion many times, starting when she first encounters the Zohar. She seems to have a connection to chaos.

Shion's childhood nanny, who has somehow begun to appear to her in visions.

Voiced by: Hiroaki Hirata in Japanese, and Dave Wittenberg (games) and Blake Shepard (anime) in English.

Shion's subordinate, who has a hopeless crush on her. He has a tendency to whine and get weepy and emotional when faced with adversity.

Voiced by: Emi Uwagawa in Japanese and Michelle Ruff (Episode I) and Heather Hogan (Episode II & III) in English.

Miyuki is a systems programmer for Vector and an amateur inventor. She is very fond of Shion and goes out of her way to help her out with her inventions when she can. 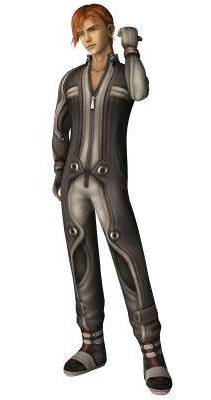 A specialized Realian built with enhanced memory, reflexes, and suppressed emotion. He pilots the ES Asher.

The former head of the Third Division, KOS-MOS's original designer, and Shion's fiancé. Deceased at the time the game opens.

Voiced by: Tomokazu Seki in Japanese and Lex Lang in English.

Rank Lieutenant. He is a A.G.W.S. pilot stationed on the Woglinde and a veteran of the Miltian Conflict. A Jerkass who actively insults Shion's optimism and belief that Realians count as people. Is eventually killed by KOS-MOS because he kept getting in line of her fire.

The head of the Kukai foundation and actually Jr.'s "brother" of sorts.

Voiced by: Unshō Ishizuka (games) and Kenji Nomura (anime) in Japanese and Kirk Thornton in English

The Captain of the Elsa

Tony's childhood friend and the navigator of the Elsa. His hacking skills are reportedly top-notch, and Vector has tried repeatedly to hire him.

A pair of sisters rescued from cruel experimentation by a pharmaceutical company by the Kukai Foundation. They serve as Gaignun and Jr.'s secretaries and seconds-in-command.

A politician and scientist who is MOMO's legal guardian and Joachim's widow. She is the Contact Subcommittee's Dedicated Representative to the Federation Government and is introduced when she hires Ziggy on its behalf.

Voiced by: Masumi Asano in Japanese and Tara Strong in English.

Joachim and Juli's daughter. She inspired the physical appearance of Observational Realians. She was loved dearly by her parents and shared a special bond with Jr.

Voiced by: Hikaru Midorikawa in Japanese and Doug Erholtz in English.

Pronounced "oo-doo". It's an acronym for Unus-Mundus Drive Operation. Despite the deception, it is not a computer program.

An indescribably powerful and alien entity, U-DO is an Energy Being that lives in UMN space, discovered by Dimitri Yuriev. Able to drive people insane through mental contact alone, it is a malevolent creature with no regard for humans...

Except for the part where all that turns out to be boldface fabrications by Yuriev. While it does drive people insane-see Albedo-this is mostly accidental on its part. In reality, it is the sentient avatar of the mind of the universe, a Gnostic God who possesses a benign, scientific interest in humans. Unfortunately, its mind is so powerful it literally destroys the minds of most people it attempts to contact. As shown throughout its interviews with Shion in game #3, it seeks to understand the goals and psychology of humans and the nature of the universe. To do that, it created two observational units-Abel, a Fei Expy who gathers information in physical space, and Abel's Ark, a colossal-star system sized-living ship who observes spiritual space. It is an important element in all three games. 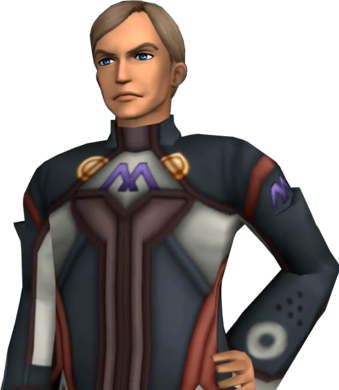 Voiced by: Kōichi Yamadera in Japanese and Crispin Freeman in English. 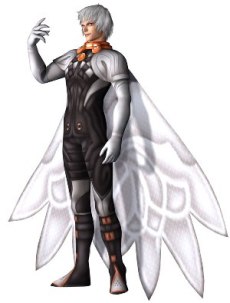 The extremely creepy and Axe-Crazy recurring villain who delights in tormenting Jr. He has an obsession with MOMO that goes above and beyond seeking the data locked inside her.

Voiced by: Joji Nakata in Japanese and Michael McConnohie (games) and Andy McAvin (anime) in English 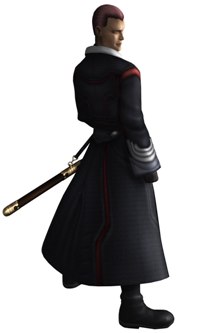 The Grand Inquisitor of the Ormus religion, Margulis is ultimately only answerable to the Ormus Pope. He seeks the Zohar as a source of power and a relic of his religion. He is driven by a fiery faith, which ultimately burns himself as often as it smites his enemies.

Voiced by: Chikao Ōtsuka in Japanese and Michael Bell in English. 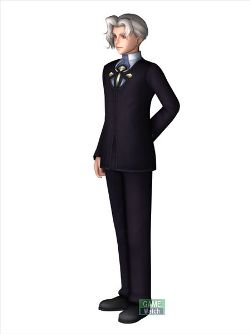 The head of Vector Industries, the largest corporation in existence. It is also revealed that he heads up the second largest company, Hyams and the religious organization Ormus. He has some sort of connection to chaos (the guy) and commands the Testaments.

Voiced by: Eriko Hara in Japanese and Kari Wahlgren (games) and Christine Auten (anime) in English.

Margulus' subordinate within Ormus. Unlike her superior, she seems to have flashes of conscience about the paths they walk, but not enough to make her reconsider her choices. She has a past with Jin.

Voiced by: Osamu Saka in Japanese and Keith Szarabajka in English.

The "father" and creator of the URTVs. He is obsessed with destroying U-DO for an unknown reason.

Voiced by: Rena Mizuki in Japanese and Erin Fitzgerald and Stephanie Mitchell (child) in English.

URTV #668, the missing unit between 667 (Albedo) and 669 (Nigredo). One of very few female URTVs produced by the Yuriev Institute, she was groomed from childhood to be Yuriev's personal aide and pointwoman for the Salvator Faction.

Voiced by: Masaharu Sato in Japanese and Steve Blum in English. 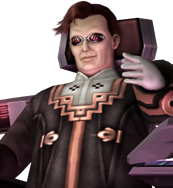 One of the brightest scientific minds in the post-Miltian Conflict galaxy. Dr. Sellers is known as much for his intellect as he is for his shifting loyalties.

Voiced by: Kouji Tsujitani in Japanese and D.C. Douglas in English. 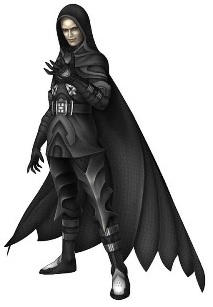 The black testament, who has some sort of connection with Ziggy.

Voiced by: Mariko Suzuki in Japanese and Bridget Hoffman in English. 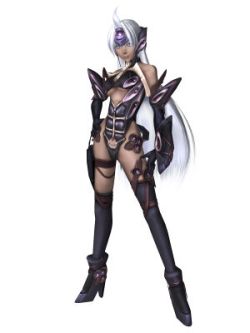 A humanoid weapon system built on the same principles as KOS-MOS, and vastly more powerful. She states that she must destroy KOS-MOS in order to be complete.