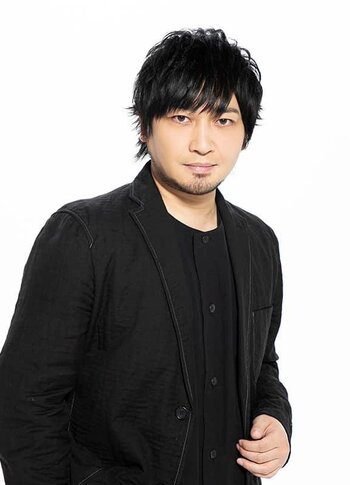 Yūichi Nakamura (born February 20, 1980 in Aji, Japan) is a seiyuu who tends to play Jerks, usually with hearts of gold underneath. He can also, however, stray into just plain Jerkass territory. How much this is dialed up to depends on the role. Early in his career he was frequently cast as snarky or sullen young men, but with time he's started to gravitate toward older roles, usually of cool/badass characters. His voice range is flexible enough to do most anything from gruff characters to crossdressers, sounding convincing even when he pitches his voice an octave higher than his normal tone.

Not to be confused with live-action actor Yuichi Nakamura, though reportedly the two are friends.

Relationship Voice Actor with Tomokazu Sugita. Him and Sugita also host a program at AT-X called Tokyo Encounter. And with Saori Hayami, with whom portrayed the relationship between the protagonist and a girl whose love for him is unrequited, at least four times. Also with Yōko Hikasa whom he nicknamed Baba due to her being the oldest female during the Inu × Boku SS casting.

Not related at all to Chie Nakamura.

I could do these tropes all day: