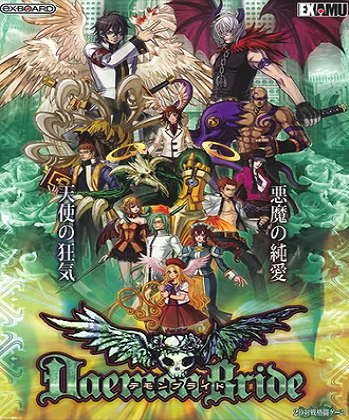 The game takes place in a school named "Kyoritsu Stella" where students received Contracts from the higher beings to reshape the torn world after a certain incident. Those receiving the Contract of Angel want to use the power to protect the world. Those who receive the Contract of Demon want to use the power for their personal gain, though most of the time they're not necessarily evil. This obviously led to a clash between both sides.

The main characters/rival setting include Kuon Sumeragi of the Angel side, helped with Angel Michael, and Reizei Abane of the Demon side, helped with Demon Lucifer. And in case you're wondering, despite the names, the helpers are female. But aside of them, the game also offers various characters too.

It was first released on July 16th, 2009. It has since received an update a la BlazBlue: Continuum Shift which adds up balance changes, sidebars a la Arcana Heart 3 and a new character (Pure), titled Daemon Bride: Additional Gain.