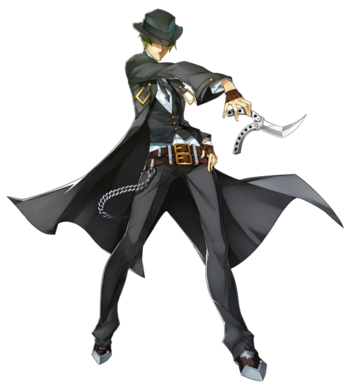 What a SMOOTH CRIMINAL.
Profile

"Fighting's really not my thing."
"Let me show you the power of the Azure! Code: S.O.L. BlazBlue, activate!"

Voiced by:
JP: Yūichi Nakamura
EN: Erik Davies (Calamity Trigger-Continuum Shift II), Spike Spencer (during Extra Arcade Scene in Continuum Shift II), Doug Erholtz (Continuum Shift Extend onward)
Hazama is a Captain within the NOL's Intelligence Department. He claims to dislike physical labor and appears to be quite personable at first, but his true motives are veiled behind his false, foxy smile. Throughout the story of Calamity Trigger, he appears to assist Noel, and appears in a few other characters' stories as well, for seemingly no reason...until the True Ending where all is revealed.
Advertisement:
In reality, he is the vessel for Yuuki Terumi, one of the Six Heroes who defeated the Black Beast 90 years prior to the game's story, the Final Boss of Continuum Shift, and one of the masterminds behind every single event that happens in the story thus far. In Calamity Trigger's true ending he drops his amiable personality and reveals himself to be the exact opposite: thriving on the pain of others. Terumi's true form is actually that of a ghost, due to injuries sustained from fighting the Beast.
In the past, after Takamagahara released him (see Terumi's entry), he cut off Ragna's arm and absconded with his sister Saya to use as the template for the Murakumo Units. He now seeks to revert Noel back into her original Murakumo unit form and use her to destroy the Amaterasu unit, stating that the world is nothing but lies and vowing to plunge it into eternal despair. He uses knives as his specialty weapons.
Advertisement:
His story in Continuum Shift reveals that he was the one responsible for the disappearances of the many NOL soldiers during Calamity Trigger - their souls were used to fuel the cauldron that would soon be used to temper Mu into Noel. In the True Ending, he kills Nu, who has resurfaced within Lambda, only to be beaten by Ragna after he gains the Idea Engine. Offscreen, he has Relius kill his body so that his ghost can enter Takamagahara and upload a special virus created by Phantom that destroys them.
His Arcade mode playthroughs are named, in the second and third game respectively: re-Play and Hundred Years Visitor. His story mode playthrough in the second game is named Advent Sword.
His Nox Nyctores/Drive is Geminus Anguium: Ouroboros, which allows him to summon chains that hang in the air and can be used to swing him back and forth or attack his opponents. In Chronophantasma, his Overdrive is Jormungand, which not only strengthens his Drive attacks, but also grants him his infamous life steal ring/aura from his Unlimited Mode.
In the fourth game, his Exceed Accel Meija Gekkouga/Glimmering Fang of the Basilisk has him stunning his foe with a kick. He then does some more kicks, ending with Serpent's Infernal Rapture, then he catches the launched foe with Ouroboros and slams them back to the ground, and finishes it with a slash of his knife covered in dark energy. His Astral, Senkon Meiraku/Hungry Darkness of 1000 Souls, has Hazama forming a portal beneath his feet that summons multiple Ouroboros chains from the ground to launch the opponent into the air. He then drops into his Terumi persona and summons thousands of serpentine spirits which coalesce into a monstrous snake that devours the opponent. Hazama then takes off his tie and holds it over his opponent's lifeless corpse. In the fourth game, this has been changed so that Terumi no longer takes over.
It has been revealed that Terumi will become a separate character from Hazama for the console release of Chronophantasma, and will have a completely different moveset. For more information, see his character page.
If you favor to read this, told by Terumi himself, go here.
open/close all folders
A - C
D - I
J - R
S - Y