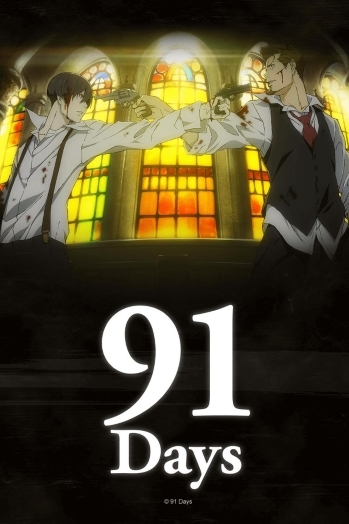 For the sake of vengeance, he will kill his friend.note Avilio, left; Nero, right.
Advertisement:

It's the Prohibition era, when organized crime reigns supreme with illegal booze and violence. Nowhere else is this more apparent than in the Lawless district. As the name indicates, the law has no presence there, allowing The Mafia to flood its streets with cheap alcohol... often mixed with blood. This is the territory that the Vanetti family calls home. Lead by Don Vincent, they have made a name for themselves in this no-man's land, but even that isn't enough to stop domestic mob wars and outside influences from creeping in. It's at this time that Nero, Vincent's oldest son, must protect all that the Vanetti family stands for. With his subordinates, Vanno and newcomer Avilio, he plans to ensure its prosperity and future...

What Nero doesn't realize is that Avilio is a False Friend who wants to kill every last Vanetti family member, even if it's the last thing he'll do. Once, he was Angelo Lagusa. He lived a quiet life with his family, but came to an end when the Vanetti hitmen appeared at their doorstep. With his parents and younger brother gunned down before his eyes, he barely managed to escape the assassins. He hid himself away for seven years, but after receiving a certain letter, he returned to the Lawless district. On his mind is only one thing - revenge.

This is a story about crime, family, murder, friendship, and revenge. And, in 91 days, it will all end with two fire-forged friends trying to kill each other.

91 Days is an anime Crime Drama TV series produced by studio Shuka. Hiro Kaburagi (Hozuki's Coolheadedness, Kimi ni Todoke, My Little Monster) is directing, Taku Kishimoto (ERASED, Haikyuu!!, Magi: Adventure of Sinbad) is serving as the series script supervisor, Tomohiro Kishi (My Little Monster) is designing the characters and serving as chief animation director, and Shōgo Kaida (Betrayal Knows My Name'') is producing the music. The series premiered July 8 of 2016 on MBS' "Animeism" programming block, and subsequently aired on other channels. The series is available for streaming on Crunchyroll. Funimation has released an English broadcast dub for this series, which began on October 23, 2016. Watch it here

For a different anime about prohibition era gangsters with more wackiness and supernatural elements, but an equal amount of bloodshed, try Baccano!.