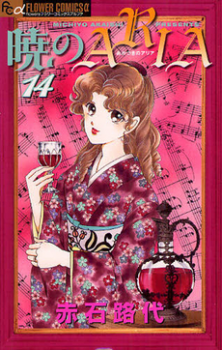 Akatsuki no Aria (Aria at Dawn) is a manga by Michiyo Akaishi, dated to the tumultuous and ever-changing Japan of the Taisho era (1912-1926). It was released in 14 volumes, but there are scanlations only up to volume 3 in English.

The protagonist of this story is a young girl named Aria Kanbara, the illegitimate daughter of a rich man and a former geisha. Aria herself is beautiful, stubborn, emotional, ambitious, and specially blessed with an incredible potential for piano playing and singing. She wants nothing more than getting away from her very severe mother and start making it big in the world, and her chance comes in when she applies to the Tokyo Music Academy.

From then on, Aria starts living her life in Tokyo and honing her piano playing skills so she can become the best pianist. Her love life, however, begins to get heated — not only does she find her half-brother Natsuo Nishimikado, the rightful heir to her father's state, but she begins to fall for him! This is on top of her teacher Shiroyuki also starting to develop more-than-platonic feelings for her, and soon she is publically presented to the Tokyo society as a member of the Nishimikado clan — which also marks her and Natsuo discovering what their bond actually is. What follows is a Coming of Age story with lots of romance, confrontations and discoveries...

Not to be confused with Akatsuki No Yona, Akatsuki Blitzkampf, or Aria the Scarlet Ammo (Hidan no Aria).

Akatsuki no Aria has the following tropes, among many others: