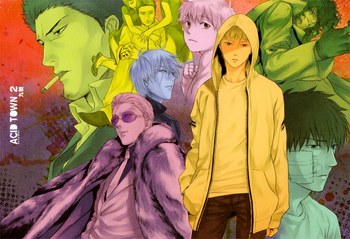 How much can you possibly do for your loved ones?
Advertisement:

Acid Town is manga created by Kyuugou and published by Gentosha. The manga has not been licensed in English, but it has been licensed in French by Taifu Comics, and in German by Carlsen Manga.

Yuki would do anything for his little brother, even steal from the Yakuza. Yuki and his friend Tsudo are caught trying to steal from the Seidoukai headquarters by Hyodo, who offers to let them go, and even pay for Yuki's little brother's hospital bills, if they can strike a deal. The deal is that Yuki must visit Hyodo weekly. It's not long before Yuki gets embroiled in a turf war by shady characters from his past who want to use him as a pawn against Hyodo.

Quite unusual for a Boys' Love title, the series takes a rather serious tone and focuses more on the story-telling than on the feelings of the protagonists or the sex, scenes of which being few and far-between.

The manga is currently ongoing.

This manga contains the following tropes