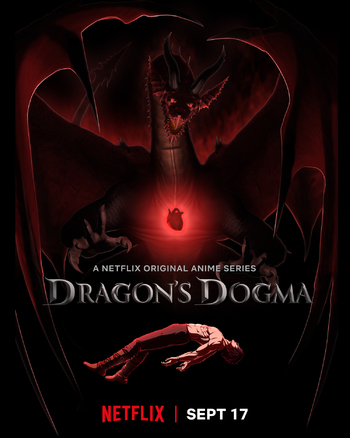 Remember this. When thou peers into the dark, the dark peers into thee.
An original net anime Dark Fantasy series based on the 2012 video game of the same name by Capcom. Directed by Shinya Sugai and animated by Sublimation, the series was released worldwide on September 17, 2020 on Netflix.
Advertisement:

Ethan, one of the residents of the village of Cassardis, has his life suddenly upended from underneath him when a Dragon attacks and destroys the village, killing his wife and unborn child in the process. When he awakens, he finds his heart missing from his chest and a challenge issued to him by the Dragon, telling him to seek it out and claim vengeance. Accompanying Ethan on his quest for vengeance is Hannah; a Pawn summoned to his side and serve the newly minted Arisen.

During their journey, Ethan and his companions encounter several individuals in need of help, as well as monsters that constantly plague the land, each problem representing one of the Seven Deadly Sins.