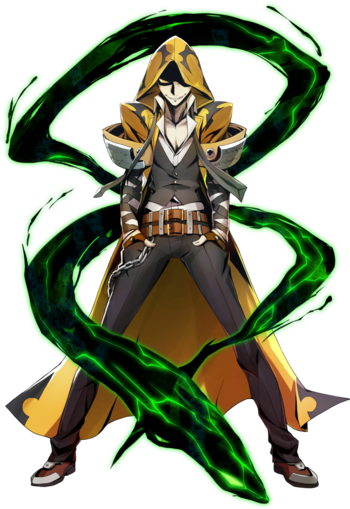 "Make sure you do your part...and SCREAM FOR ME!"

Voiced by:
JP: Yūichi Nakamura
EN: Doug Erholtz
A former member of the Six Heroes and an entity occupying Hazama's body. Hazama's hair spikes up whenever Terumi decides to manifest, which is usually when facing Ragna, Rachel, or the other Six Heroes. In the games, he was the one behind Ragna's current state, and later masterminded the Ikaruga Civil War, with ends with him erasing part of Jin's memories after he killed the Ikaruga leader, Lord Tenjo. Terumi is now a separate playable character in Chronophantasma. He is a DLC character who became available shortly after the game launched. Those who pre-ordered the game or bought a copy of a first run edition receive a code to unlock him as a bonus. He returns in Central Fiction, this time as a base game character.
Advertisement:
His arcade playthrough is named Double Face.
Terumi no longer has Ouroboros as his Drive, even though he still uses the twin knives as his weapons. His new Drive is called Force Eater, and all of his Drive attacks have heavy meter gain, while the opponent gains none from being hit by them. His Overdrive is Nightmare Reaper, which strengthens his Distortion Drives while allowing his Drive to actively steal meter from his opponent. He is described as "a character with more Distortion Drives than specials", which was later proven true upon the reveal that he has no less than SIX supers at his disposal.
In the fourth game, his Exceed Accel Jaraku Engokusen/Dungeon of Serpents has him doing an upward kick that launches the foe up. If it connects, he then creates a portal on the ground where a giant snake head made of darkness rise up and strikes the airborne opponent. His Astral, Kamigaeri: Orochizantō Reppūga/Unholy Wrath of the Basilisk, has him throw two Ouroboros hooks into the ground, targeting the opponent's current location. If they connect, the opponent is ensnared by chains as Terumi opens a portal behind him, laughing maniacally as a stream of serpentine spirts flood out the portal and bombard the opponent. He then transforms into a shadow version of Hakumen with Tron Lines on certain areas of his armor, and slashes the opponent, erasing him from existence.
Advertisement:
You can also read it in his voice here.
open/close all folders
# - D
E - I
J - R
S - Z

WARNING: This whole character is a spoiler for Central Fiction, so the following lists are all unmarked. Tread at your own risk. 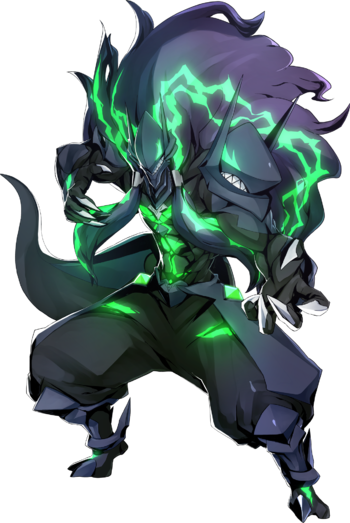 The one, true Susano'o. Definitely an asshole.
Profile

"I am might. I am power. I am EVERYTHING! This is the god-blade that will end existence. You stand before Takehaya Susano'o! THE END HAS COME!!!"

Voiced by: Kenta Miyake (Japanese), Ray Chase (English, Cross Tag Battle)
Full name Takehaya Susano'o no Mikoto. The true identity of the man known as Yuuki Terumi, and the Japanese god of storms. This is his original form before he separated into two halves due to his body being linked to the Master Unit: Amaterasu, his "sister". His body, the armor, became a dormant shell free of evil which would later be occupied by Jin Kisaragi, becoming Hakumen. His will, or mind, became the entity that would later be known as Yuuki Terumi. When mind and body reunite, Takehaya Susano'o is reborn. His personality changes completely, becoming a ruthless killing machine that seeks to destroy everything in sight. He hates humans because they are creations of his sister Amaterasu, whom he also hates with a burning passion. Destroying what Amaterasu creates is the only thing that gives his existence meaning, as well as sustains his life. He is unlocked after completing the game's story mode.
His Drive is called Takegaminote lit. "God of Military Arts"/Divine Warrior. He starts out with eight abilities, seven of which are locked. When he lands a normal attack hit on the opponent, he cycles through the next icon in numerical order. If he then hits the opponent with a Drive move, he unlocks the icon, or if it's already unlocked, levels it up and changes its properties and damage, after which the cycle resets to the start. His Overdrive is called Zessou no Koku/Shrieks of the Entombed, which temporarily unlocks all of his abilitiesnote but only for the duration of the Overdrive and gives him a new Distortion Drive called Nakiugatsu: Houraku no Enki/Collapsing Resentment that instantly unlocks every seal or upgrades it by one level if it's already unlocked.
His Exceed Accel is called Chitagiru: Rengeki/Bloodspiller, which has him punch the opponent in the stomach, knee them into the air and hit them with a Rolling Attack, then finally grab the opponent and slam them into the ground. His Astral Heat, Kyo'ou no Houkou: Orochi Messatsu/Roar of the Mad King, has him slam his opponent into the ground, then conjure a large sword of dark energy, similar to Terumi's Astral. He then swings the sword down, causing a multitude of dark energy slashes to cover the screen in darkness, erasing the opponent from existence and destroying the landscape.
Tropes involving Susano'o