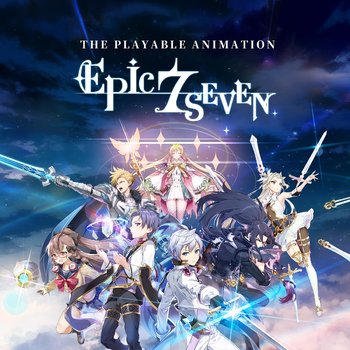 Epic Seven is a turn-based mobile gacha RPG developed by Super Creative and published by Smilegate Megaport for the Android and iOS smartphones. Initially a Korean game released on August 30, 2018, it received an English global version on November 8, 2018, and a Japanese version published by Yostar on November 7, 2019.

As a standard for gacha games, the player randomly receives a selection of heroes to build adventuring parties with, each having their own unique strengths and skills. The general gameplay consists of entering corridor-based maps and fighting waves of enemies, then culminating in a boss battle. Players can also collect various equipment, charms, fodders and artifacts to further improve their characters and teams to tackle even harder contents.

With its Tagline of "The Playable Animation", the game boasts a 2D animated art style emulating the Live2D technology, following its rising usage in gacha games since the late 2010's. It also uses a proprietary game engine, the "Yuna Engine", named after the Epic Seven character, Yuna Woo.

Epic Seven is most likely inspired by Summoners War: Sky Arena due to the plethora of similar gameplay systems and mechanics (gear slots, enhancements, capped levels and promotions up to 6★) as well as similar stages/dungeons (five elemental boss fights called Hunts, dungeon-crawling labyrinths and floored dungeon towers), among other things.

Synopsis
A long time ago, a war between gods happened. In the middle of it, the god Orbis was struck down, and his wife Diche, in her grief, made a world from his corpse, which she tended to, instead of fighting on the war.

Tired of her losing time with a corpse, the other gods cast on it a curse that manifested itself as the Archdemon in the world of Orbis, with the destruction of Orbis as it's objective. To counteract this, Diche created the Heir system, where some beings of Orbis are selected by Guardians and are given some of Diche's power, with Ras Elclare as Diche's own direct Heir.

Alas, this was not enough and Orbis was on the verge of destruction, with Ras and the Heirs failing to stop the Archdemon. Using a lot of her power, Diche turned back time to give the world of Orbis a new chance.

We are in the seventh attempt to save Orbis now.
Diche's power is fading.
The Heirs that died, aside form Ras, can't be revived.

It's the epic of the 7th world, and our last chance.