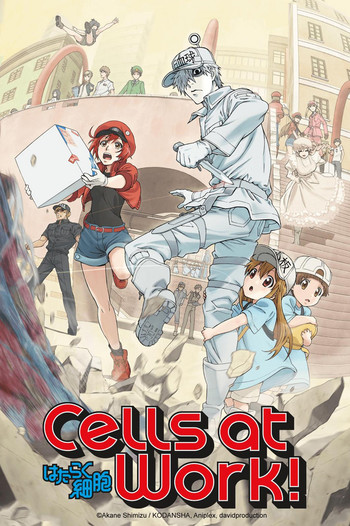 Though we don't know who you are!
For your sake, we're working hard!
All of us together are supporting you with all of our hearts!
No matter what kind of strife!
Each of us would risk our life!
We always take pride in what we do and health comes first!
—Mission! Health Comes First!, the theme of Cells at Work!
Advertisement:

The human body is a vast, wide network of paths, tubes, and chemicals. To keep all of that in order, it has 37.4 trillion cells set to do their part. Supplying oxygen to muscles? Red blood cells can handle it. Remembering the body's reactions to foreign substances? Let the memory cells jot it down. And woe to the poor germ that has a run-in with a Neutrophil or a Macrophage. Between keeping the body clear of antigens and delivering the proper materials to its different parts, there's a lot of work to be done to keep everything in top shape. It may sound daunting to the average person, but to a cell, it's all in a day's work.

Cells at Work! (Hataraku Saibou) is a manga by Akane Shimizu about all the wonders of the human body, shown to us as humans themselves. The manga began with a one-shot pilot called The Story of Cells (Saibou no Hanashi) and ran in Shonen Sirius from 2015 to 2021. The manga has been licensed for North American release by Kodansha Comics.

An anime adaptation by David Production began airing on July 8, 2018. It is licensed by Aniplex USA and is streamed internationally through Crunchyroll, spanning 13 episodes. The English dub of the anime was released for Blu-Ray on August 27, 2019. The anime is also noted to be the first title where Aniplex USA dubbed the opening song in English.note Anime titles that are dubbed into English tend to leave the opening and ending songs left sung in Japanese, as it's generally too tedious to find a voice actor/actress who has some singing capacity. A fourteenth "special episode," "Common Cold," was released months after the original run of the anime as a Christmas Day special. A second season was announced in 2019, and premiered on January 9, 2021.

The series has received several spinoff titles over its run, further exploring parts of human anatomy Shimizu couldn't fit into the original:

Example of:
Devoured by the Horde