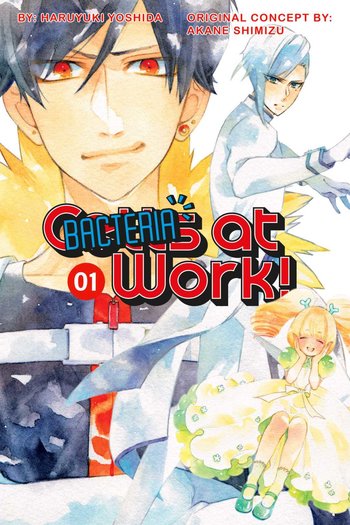 Whatever one feels about the Anthropomorphized Anatomy series Cells at Work! and its spinoffs, it's hard to deny that the series knows how to diversify. The Shōnen Edutainment manga has served as a launchpad for several different spinoffs targeted towards multiple demographics: shonen, shojo, seinen, and even josei. Apart from their educational leanings, however, all of these spinoffs share one major attribute: the series focuses on the lives and jobs of human cells.

As the name implies, Cells at Work: Bacteria! (Hataraku Saikin) is a shojo manga focusing on the lives of the various bacteria that colonize the various areas of the human body, be they pathogenic ("bad bacteria") or beneficial ("good bacteria"), or neutral ("opportunistic bacteria"). As they are the main characters, the bacteria are treated differently from the other titles in the franchise: rather than being alienesque shonen-manga villains or brutal, animalistic forces of nature, they're all recast as characters in a shojo manga: lots of plucky cute girls and brooding pretty boys abound. There's also a bit more nuance to the morality of the series: the good bacteria aren't always "right" and the bad bacteria aren't necessarily always "wrong." The series all but admits that there has to be a balance to keep everything in check.

Bacteria is written and illustrated by Haruyuki Yoshida, with an original concept by Cells at Work! creator Akane Shimizu. It ran in the Shōjo anthology Nakayoshi from May 2017 until July 2020. The manga has also been licensed for Western release by Kodansha Comics, and its English run started in July 2020.

A sequel, Cells at Work: Bacteria NEO, is set to launch in February 2021.

Cells at Work: Bacteria! contains examples of the following tropes: