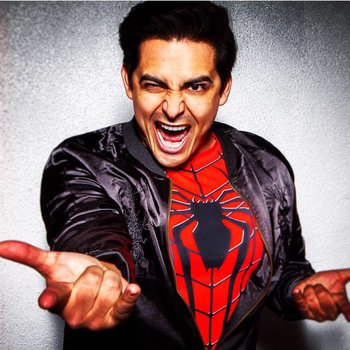 Robbie Daymond Niles (born March 11, 1982 in Chesterfield, Missouri) is a Los Angeles based voice actor. He's best known as the voice of SwaySway on Breadwinners, the voice of Mamoru Chiba (aka Tuxedo Mask) in the Viz Media redub of Sailor Moon, and the voice of Raymond on OK K.O.! Let's Be Heroes.

He's also part of the Loud, Annoying, and Very Annoying

"Oh, am I mistaken? I though I heard something about tropes..." *SMACK* AAAAAAH!!!! YOU FERAL BEAST! I should have never taken you in, Abby Trott! YOU WICKED BEAST! Now I'm already dead!!