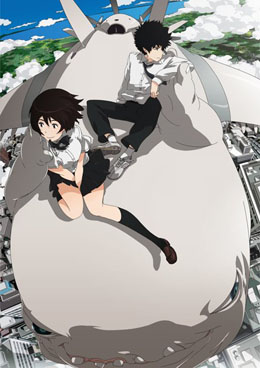 In Cencoroll, large, mostly white amorphous creatures have been appearing in town. Tetsu is a male high school student who keeps one such shapeshifting creature named Cenco, which he can control via telepathy, though wants to keep it a secret. An inquisitive girl named Yuki chances upon Cenco at school.

Curiosity getting the better of her, she sticks with them, even as they get attacked by Shu, who wants Cenco's powers for himself.

Based on a one-shot manga titled Amon Game, written and illustrated by Atsuya Uki. The manga won the Grand Prix Award in Kodansha's Afternoon Shiki manga competition in 2005. In 2006, Anime Innovation Tokyo began an initiative to sponsor anime produced by independent animators and small studios and chose Cencoroll as their first sponsored project. In 2007, Uki created a Cencoroll short film and distributed it over the Internet; due to the praise it received, Uki decided to nearly singlehandedly write, design, direct and animate a 30-minute Cencoroll film. Cencoroll marked the first time the production company Aniplex had agreed to back a project that was animated almost entirely by one person.

A sequel is was screened combined with the first film (titled as Cencoroll Connect) and opened in Japanese theaters on June 29, 2019. Aniplex USA premierd Connect at Anime Expo on July 4, 2019.

This Film Provides Examples Of...