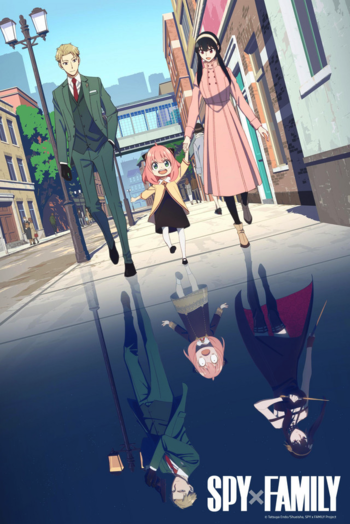 "Everyone has a secret self they don't show to other people."
"I'm afraid we have another assignment for you already. Your target is the leader of the National Unity Party, Donovan Desmond. He is a grave threat to the truce between the East and the West. Your mission is to get close to him and probe into any seditious activities. In order to do so... you will marry and have a child."
— Twilight's mission briefing
Advertisement:

SPY×FAMILY (pronounced simply "Spy Family") is an ongoing, biweekly manga written and illustrated by Tatsuya Endo, which began serialization in the online magazine Shonen Jump + in March 2019. It can be legally read in English online at Manga Plus.

As of August 2019, due to Viz Media licensing the title, this is now only true of the first three and most recent three chapters. All chapters are now available on the Shonen Jump app, available in countries such as Canada, Ireland, UK, and the United States. Viz began releasing the physical volumes in June 2020.

The countries of Westalis and Ostania are locked in a cold war rife with espionage and assassination. After flawlessly completing yet another mission, Westalis's top agent, the master spy known only as <Twilight>, has been tasked with investigating the activities of Donovan Desmond, leader of Ostania's far-right National Unity Party. The problem is that Desmond is a social hermit and only ever makes public appearances at his sons' school functions. Thus Twilight has been ordered to get close to Desmond... by getting married and having a child. Oh, and he has seven days to find that family.

Assuming the identity of psychiatrist Loid Forger, Twilight recruits Anya, an orphan girl who wants a loving family (and some entertainment), and Yor Briar, an Ostanian civil servant who needs a husband to avoid drawing attention in the heavily suspicious Ostanian society, to play the part of his daughter and wife. Making things more complicated, however, is that Anya and Yor are keeping secrets of their own: Anya escaped from a lab that gave her telepathic powers and Yor is an infamous Professional Killer code named Thorn Princess, who needs a husband to avoid societal scrutiny in socially-conservative Ostania from possibly interfering in her work.

Thus begins Loid, Anya, and Yor's attempts to pretend to be the best family they can, all while hiding their secret identities from the others... and trying to ignore the growing signs that they're not just pretending.

Family Portrait, a Japanese novel written by Aya Yajima with illustrations by Endo, featuring four original stories about the cast, was released in July 2021. An official fanbook, Eyes Only, was released in May 2022.

The Briar Siblings must really be made of sterner stuff.

"This ID is Fake"

The Briar Siblings must really be made of sterner stuff.

"This ID is Fake"