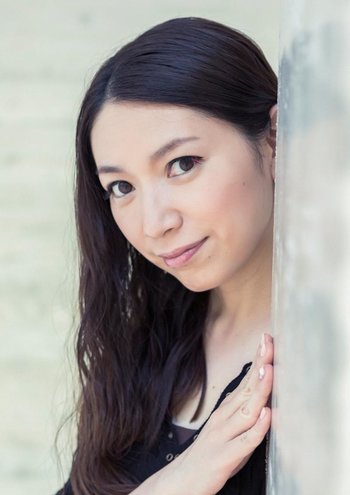 Houko Kuwashima (born December 12, 1975) is a seiyuu who started her career in the mid-90s, pretty similar to Mamiko Noto, only MUCH more senior in business. She's very versatile in her work and has a great variety of voice roles... well where do we begin... Sweet girls? Check. Broken Birds? Check. Lolis? Check. Strong-hearted women? Check. Girls who look exceedingly like boys? Check. Bitches? Oh hell yes, CHECK!

Her first major role was as the Genius Ditz Yurika Misumaru of Martian Successor Nadesico, the series that got the title 'Best Anime', which also further supports her career.

She has quite a history of pairing off together with Kotono Mitsuishi and/or Aya Hisakawa. And for some reason, a lot of characters she voiced have a death star following them. The mortality rate for her characters or those near them are kinda high. Twice she stood in for Tomoko Kawakami, and following her passing has now permanently succeeded the roles.