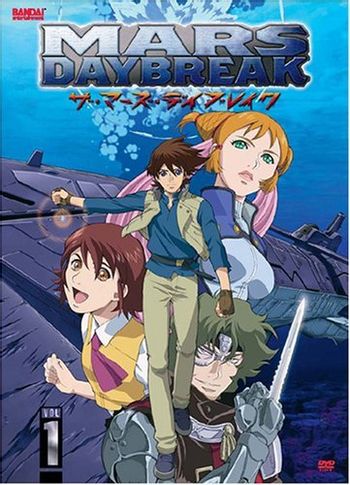 Kenran Butōsai Za Māzu Deibureiku, or Mars Daybreak, is a Humongous Mecha anime aired in 2004 by TV Tokyo and licensed by Bandai Entertainment in the US.

The story takes place on a colonized Mars, where nearly the entire planet (save for the peak of Olympus Mons) is covered by a massive ocean (the initial colonization apparently having Gone Horribly Wrong). The people live on floating city-ships, with the planet's abundant water being their primary export. Somehow, the end of the "Pan-Galactic War" has left the planet in the midst of a severe economic depression. Of course, Economic troubles mean crime. And with a planet that's nearly all ocean, that can mean only one thing: Pirates! With the surface under heavy satellite surveillance, the pirates have been forced underground. Or rather, underwater. Instead of sailing over the waves, they lurk under them in submarines. And the baddest pirates around are the crew of the sub Ship of Aurora.

Which brings us to our hero, Gram River: A young man living on the city-ship Adena. While trying to help a friend get out of a bad situation, he ends up in the middle of a raid by the Ship of Aurora, and thrown overboard when the port is rammed and breached. Fortunately, a Humongous Mecha comes out of nowhere and rescues him. Unfortunately, this mech is assumed to be part of the pirates' forces, and is promptly attacked by the local Earth Forces mechs. He is eventually hired on by the crew to pilot the mech.

Naturally, nothing goes that easy, or there wouldn't be much of a series. The first major complication is the fact that Vess, one of Gram's dearest childhood friends, has just been stationed to Mars as part of the Earth Forces, and she isn't happy at all to discover that he's become a Pirate. The other is the initially-unrelated kidnapping of the Granddaughter of the Earth's President, that they get blamed for when they just happen to go after the real kidnappers for their own reasons, and wind up catching them just as they're trying to ransom her, and further complicated when they end up inadvertently recruiting her.