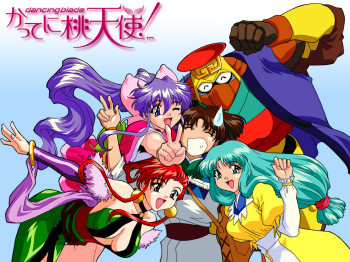 The story takes place in a Fantasy feudal Japan, mixing traditional architecture and clothing with magic, fantastic creatures, and technology; it also pokes fun at various Japanese folktales and myths.

The Dancing Blade series tells the story of Momohime, a young girl born from a peach, who's searching for her origins. Travelling along with the unnamed Main Protagonist, a magician and her Childhood Friend she has a (mutual) crush on, they'll meet during her quest several characters who become their True Companions: Oinu, a kind and meek demon dog assuming the form of a young girl, specialist in light and healing magic; Sarukichi, a giant mechanized man, expert in firearms and gadgets; and Kijime, a fun-loving Femme Fatale who excels in fire magic and at whipping people.

A light-hearted tale with lots of wacky moments and a few dramatic scenes, it's very akin to Japanese anime of The '90s like Tenchi Muyo! and Slayers, and as such, was never released outside Japan.

The Dancing Blade franchise comprises two games, both released on PlayStation and Sega Dreamcast, and later re-released as a bundle on Play Station Network; as well as three Drama CDs.

The Dancing Blade: Katte ni Momotenshi series as a whole provides examples of: