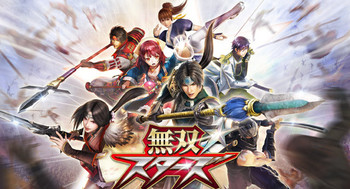 Warriors All-Stars (無双☆スターズ Musō ☆ Sutāzu in Japanese) is a Massive Multiplayer Crossover Hack and Slash video game developed and published by Koei Tecmo, in the same vein as Warriors Orochi before it. Unlike Warriors Orochi, which focused specifically (and, at first, exclusively) on Dynasty Warriors and Samurai Warriors, Warriors All-Stars encompasses more than ten of Koei Tecmo's non-licensed titles. It was released on the Sony PlayStation 4 and Sony PlayStation Vita in Japan and Taiwan on March 30, 2017, in North America on August 29, 2017 and in Europe on September 3, 2017, for the PC and the PlayStation 4.

There exists a Magical Land that has long prospered thanks to a miraculous spring. However, the king who controls the spring has died, sending the world onto the path of destruction. To save it, Queen Sayo tells her daughter Princess Tamaki of a legend of a hero from another world that will grant his power to his guide, to help him/her become the new ruler. If the guide is coronated the new ruler of this land, he/she will have the power to revive the spring. Tamaki attempts a ritual to summon this hero, but her spell goes haywire, instead summoning multiple heroes from various worlds, scattering them across their land. To make matters worse, Tamaki's older brother Shiki and cousin Setsuna also have their sights set on the crown, dividing all of the summoned heroes into three opposing factions.

The playable roster consists of the following characters:

Warriors All-Stars has the following tropes: