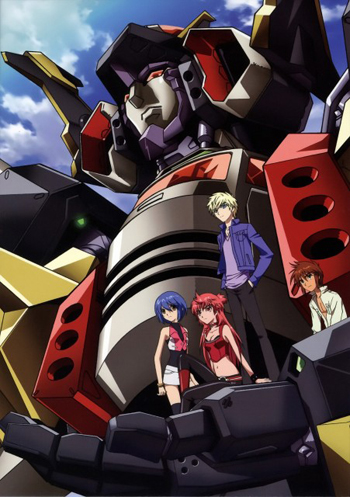 Gravion. Only without the maids.
"Super Divine Beast Combination!"
Advertisement:

Dancouga Nova is a Super Robot 12-Episode Anime that started airing on February 15, 2007. Masami Obari designed and directed the series. This is the supposed sequel to Super Beast Machine God Dancougar, though it is more a Spiritual Successor to Gravion.

The story takes place in 2107, when wars spring up all over the world and Japan has been devastated by a massive earthquake. Where ever the fighting turns to favor one of the sides, a mysterious force appears to even the odds, but never finishes off the side that once was winning. It leaves once the balance of power is restored. This is Dancouga Nova.