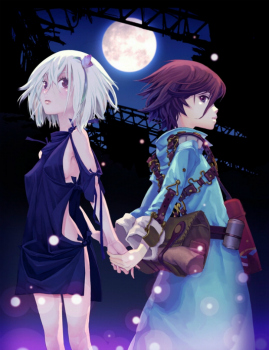 "Despite a planet so vast...
and populated by countless number of people...
Why is it that I'm so alone?
This is dedicated to those that share the same feeling of isolation."
— Excerpt from the North American trailer
Advertisement:

Fragile Dreams: Farewell Ruins of the Moon (フラジール ~さよなら月の廃墟~, Fragile: Sayonara Tsuki no Haikyo) is a third-person Action RPG/Adventure Game released on the Nintendo Wii and developed by Tri-Crescendo, the same team who made Eternal Sonata and had a hand with the Baten Kaitos games. It was released by Namco Bandai Games in Japan on January 22, 2009, XSEED Games in North America on March 16, 2010 and in Europe by Rising Star Games on March 19, 2010.

The game tells the story of a young boy named Seto, possibly the Sole Survivor of a world where humanity has suddenly vanished, leaving its cities abandoned. After the old man who he had been staying with passes on, Seto is left completely alone, but upon reading a letter the old man has written for him, he decides to leave the safety of his home and venture to "the red tower to the east" in hopes of finding other survivors.

That's it, really. Fragile Dreams is marketed as an "atmospheric adventure" focusing on "human drama" and emotion. While it plays similarly to a Survival Horror game, it's not horror outright, instead settling for being eerie, sad, lonely, depressing and (rarely) disquieting, while also relying heavily on the player's ability to draw his or her own conclusions about why most things are the way they are.

Heavy fan demand for a localization surfaced following the original release back in January 2009. Luckily, XSEED Games and Rising Star Games listened and released a North American and European version in March 2010, respectively, complete with original voices, reversible box art, and a mini-soundtrack bundled with Fragile Dreams. A rare Manga adaptation has been released, following up on the events of the game.

Fragile Dreams: Farewell Ruins of the Moon contains examples of: