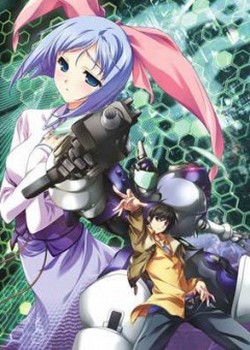 Mechas in cyberspace with Uzis. What more could one ask for?
Advertisement:

Baldr Force EXE Resolution is a four-episode OVA sequel to a (comparatively less well-known) top-down shooter for the Dreamcast and PS2 by the name of Baldr Force and directed by Takashi Yamazaki, part of the Baldr series. Funimation Entertainment licensed the OVA for North American distribution on July 21, 2007 and was released on May 20, 2008 including all 4 episodes on one DVD. Funimation released the OVA under the name Baldr Force EXE, dropping "Resolution" from the title.

Tohru Sohma is a member of a fearless gang of hackers calling themselves "Steppenwolf" - but when tragedy strikes and the group is disbanded, Tohru is forced into the ranks of FLAK, a military organization charged with protecting the hidden data paradise deep within the vast network of servers. Indentured into service and out for revenge, Tohru cannot let go of the dead of the past even as a ghost of the present takes shape.

Faced with the loneliness and confusion of being trapped between two worlds, there is only one question... What is reality?

Do not confuse this with Rockman.EXE