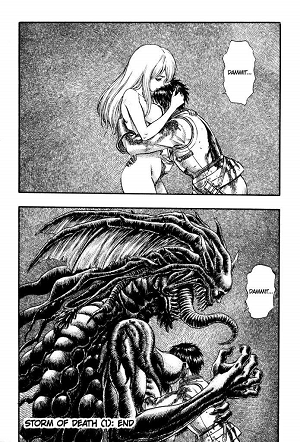 Alice and Bob meet up at a bar. Alice is dressed very provocatively and is acting rather seductively towards Bob, which Bob is obviously enjoying. Things start to heat up between the two and they exit the bar and slip out to somewhere nearby that's dark and quiet. Things start getting intimate. Alice seems Ready For Love Making, and Bob is ready to comply but suddenly things take a horrible turn for Bob. Alice's mouth gets inhumanly wide as she seizes Bob before he can run away. Bob lets out a final scream as she eats him whole and alive.

Bob has fallen prey to a Literal Maneater. She is some sort of monster (alien, demon, vampire, etc.); who (at least superficially) resembles a beautiful woman, in order to attract obliviously unlucky men and then devour them. She (and they're usually a she) is a very popular type of evil creature to appear on Monster of the Week style shows and all too often a Knight of Cerebus among them. Expect her to be Ms. Fanservice and a Manipulative Bitch, because that's how she lures in victims; although it's not too surprising if she turns out to be a hideous shapeshifter who's only pretending to look like a beautiful human.

Also see the Femme Fatale and The Vamp, who may also use their sexuality for evil purposes, but they don't eat their lovers (at least not literally). For a type of female monster that preys on women rather than men, see the Lesbian Vampire.