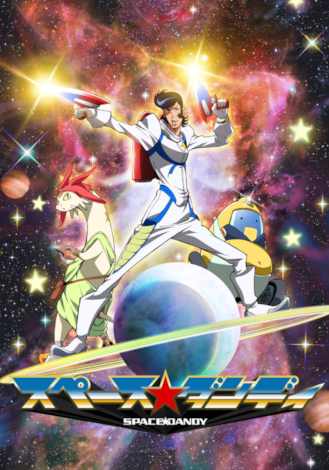 Space Dandy! He's a dandy guy... in space.
"A flair for the dramatic, a love for the ladies, and one sweet head of hair. That's the Dandy way!"
—Toonami promo
Advertisement:

In the far-flung future, there is a demand for exotic aliens. If there's some crazy bright pink tentacled monstrosity out there that you want in your zoo or some strand of genetic material your scientists want a gander at, then Space Dandy is the man for the job.

Dandy is an alien hunter, someone who is paid to find new, undiscovered alien species. It's an industry where the prize goes to the person who finds aliens the fastest. Dandy and his companions, QT the worn-out robot, and Meow the cat-like alien from Betelgeuse, fly around space in the ship Aloha Oe to far-flung planets in search of strange beings.

While he's determined to get the job done, at the end of the day, Dandy would rather just spend his time with the lovely waitresses at BooBies. Meanwhile, they're being chased by minions of the Gogol Empire, for reasons unknown...

From Studio Bones, the creators who brought you Cowboy Bebop, Fullmetal Alchemist, Eureka Seven, and Soul Eater, comes Space Dandy, a fourth-wall-breaking retro-futuristic Raygun Gothic sci-fi fantasy adventure comedy series. The series made headlines when it was announced that Shinichiro Watanabe — creator of Cowboy Bebop and Samurai Champloo — would be heading it. It didn't take very long for Funimation to acquire the rights to dub it, and very shortly after that, it was announced that Toonami would be airing it.

The news didn't stop just there. When Toonami picked up the rights to air it, they gained the rights to air it first. The series debuted both the English dub and Japanese dub at the same time, and continued to air in the US every Saturday night at 11:30 EST/10:30 CST. Taking the time zone difference into account, this is a few hours before Japan aired it on Sunday (the exceptions being the season finales, which were both aired on TV Osaka three days before the English release, as well as the very first episode, which was briefly available with subtitles via Madman Entertainment streaming approximately two days before the official airdate).note Sunday night is when most stations in Japan air new anime series. In another surprise, Animax Asia, which also simulcast the series in South East Asia at the same time as Japan, aired the show in both Japanese and English, using Funimation's English dub. In Australia, SBS Viceland airs the show.

The series' first season ran from January 3, 2014 to March 26, 2014, with a second (and final) season announced in mid-March at AnimeJapan and then confirmed for an English broadcast after the finale's credits. The series' second season began on July 5th, 2014 and concluded on September 24th, 2014; as with the first season, it was nearly simultaneously released in English and Japanese.

Now has a character sheet; feel free to go forth and fill it with tropes.

Note: Due to the comedic nature and setting of this series, IN SPAAAAAAACE! is going to get a lot of mileage on this page.