The cast of Space☆Dandy, baby.

Crew of the Aloha Oe / Team BBPnote "Blockhead, Bonehead and Pinhead". The team nickname given to them during the space race which has since become a recurring name for them

Voiced by: Jun'ichi Suwabe (JP), Ian Sinclair (EN)
The titular "dandy guy in space", Dandy is a young man with a sweet pompadour, a junk bucket spaceship, and no greater aim in life than to make money identifying unknown alien species so he can spend it at every BooBies restaurant in the galaxy.
QT 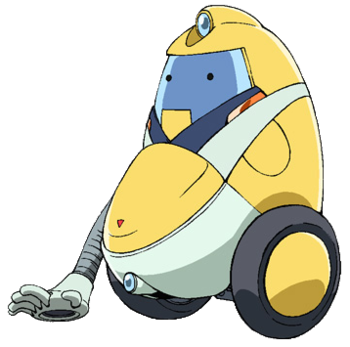 Voiced by: Uki Satake (JP), Alison Viktorin (EN)
Dandy's long-suffering robot companion who operates as a vacuum cleaner. QT is considerably more intelligent and reasonable than the blockheaded Dandy and Meow, but is often woefully brought down to their level of incompetency thanks in no small part to out-of-date hardware.
Meow 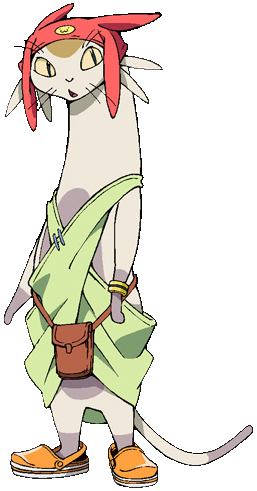 Voiced by: Hiroyuki Yoshino (JP), Joel McDonald (EN)
Nicknamed by Dandy because of his catlike appearance and unpronounceable real name (pronounced "Nynyamo", captioned as "Me#$%"), Meow is a Betelgeusian. Misidentified as a rare new species of alien by an out-of-it QT in the first episode, they're dismayed to find that Betelgeusians are way too common to be worth any money, but he has enough leads on the locations of potential alien catches that they decide to bring him along.
Advertisement:

Voiced by: Houko Kuwashima (JP), Colleen Clinkenbeard (EN)
A specimen inspector at the Alien Registration Bureau, where alien hunters like Dandy come to cash in their rare finds (or, in Dandy's case, fail to do so). Although she may look like an ordinary clerk, her calm demeanor hides her able hand-to-hand combat skills.
Honey

Voiced by: Yurin (JP), Alexis Tipton (EN)
A Bubbly Waitress at the branch of BooBies "breastaurant" that Dandy frequents.
Advertisement: 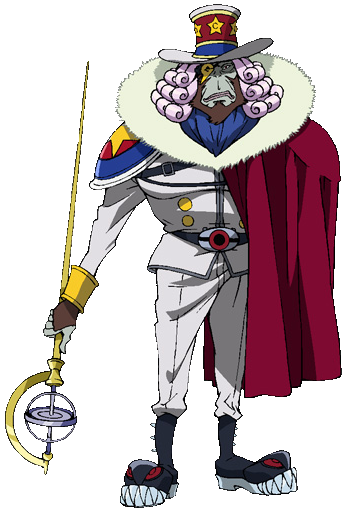 Voiced by: Unshō Ishizuka (JP), J. Michael Tatum (EN)
A high-ranking member of the Gogol Empire, who has been ordered to capture Dandy to settle a large intergalactic war for reasons unknown.
Bea 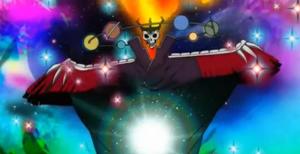 Voiced by: Banjo Ginga (JP), Kent Williams (EN)
The ruler of the Gogol Empire under whose command Dr. Gel is pursuing Dandy. 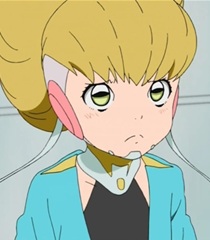 Voiced by: Kana Hanazawa (JP), Jad Saxton (EN)
An orphaned Gentooan girl that Dandy captures on a mission but, due to the Aloha Oé being impounded, he is temporarily stuck with.
Prince 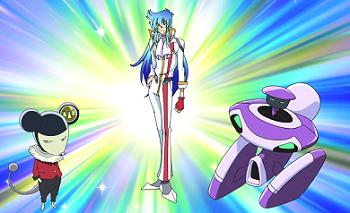 Prince and his team.
Voiced by: Yūki Kaji (JP), Eric Vale (EN)
A famous human space-drag racer whose popularity with the ladies at Boobies makes him a rival to Dandy.
Laika 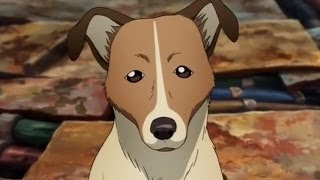 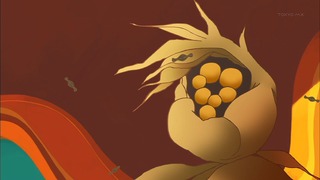 Voiced by: Mugihito (JP), Chuck Huber (EN)
A cerebral plant from the planet Planta, he is surprised to meet Dandy since he had never encountered an organism that was neither plant nor microbe. He is very introspective and wants to use Dandy's non-plant nature to remove Code D, which causes plants to become ginormous, which he sees as dangerous.
033H 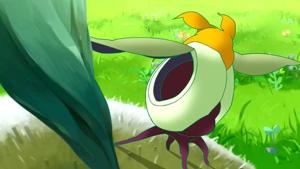 Doctor H's adorable daughter, she is quite keen on her new friend Dandy, whom she just knows as Human, and wants to help him.
Meow's Family
Meow's family who lives back home in a planet that closely resembles than of a typical 20th century planet.
The Chameleonian
Voiced by: Various
An enigmatic and elusive shapeshifting alien that has never been caught or properly studied. It's 100 million wulong bounty entices many an alien hunter, but few have every come across. Given what it can do, that's hardly surprising.
Toaster
Voiced by: Akio Ōtsuka (JP), Brandon Potter (EN)
A resident of Dream Island, the dumping ground for the "defective" robots of Deathroid City. Despite his mismatched and decrepit exterior, he is a rather charismatic machine that helps QT find Miss Maker and holds sway over the many robots who were likewise exiled there. Unfortunately, his plan to achieve his benevolent desire to free his brethren from oppression reveals that his appearance isn't the only thing about him that's grotesquely warped.
Alternate Dandy and Crew
Alternate Universe versions of Dandy and his Crew.
Ukulele Man
Voiced by: Toshio Furukawa (JP), Bryce Papenbrook (EN)
A rare and singular example of his kind, the Ukulele Man is an alien musician and self-proclaimed "smile aficionado" that resembles a skeleton marionette with a tribal mask for a face. He resents his static facial features and desires to better express himself. To that end, he has lured Dandy to his mansion on a hostile jungle world as he covets his smile above all others and believes it to be the key to achieving his goals.
Carpaccio
Voiced by: Daisuke Namikawa (JP), Todd Haberkorn (EN)
Freckles
Voiced by: Yui Makino (JP), Ashly Burch (EN)
An Ordinary High-School Student from Baberly Hills High. Unlike the most popular students — experts at dancing and singing — she's at the lowest of the pecking order, along with the anime freaks and teacher's pets.
Erssime
Voiced by: Seiran Kobayashi (JP), Maxey Whitehead (EN)
A young and cheerful fisherman kid whom becomes Dandy's guide in the planet with a legendary fish alien. Loves her grandpa a lot.
Gentle
Voiced by: Ryōhei Kimura (JP), Vic Mignogna (EN)
A gentlemanly Cloudian bounty hunter.
Johnny
Voiced by: Hiroshi Kamiya (JP), Johnny Yong Bosch (EN)

The Leader of the Jaicro Empire who dreams of becoming a rock star.

Ferdinand
Voiced by: Kenjiro Tsuda (JP), Kyle Hebert (EN)
One of the many strange residents of Planet Limbo.
Poe
Voiced by: Kaori Nazuka (JP), Elizabeth Maxwell (EN)
A quiet young woman who is in fact the personification of Planet Limbo.
Tohn Jravolta
Voiced by: Kōichi Yamadera (JP), Major Attaway (EN)
A "Dancingian" who shows up to the planet Grease for the revival of the centennial dance-off.
Dolph
Voiced by: Kazuya Nakai (JP), Bryan Massey (EN)
Scarlet's ex-boyfriend who continues to stalk her after their relationship ended.
Catherine
Voiced by: Miyuki Sawashiro (JP), Morgan Garrett (EN)
An ex-girlfriend from Dandy's past. Who happens to be a fourth-dimensional being resembling a tessaract