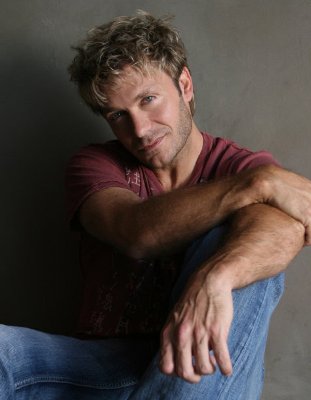 ("min-YAH-na") is a voice actor who has managed to make himself quite a niche in the Anime community. Vic started out as Dark Mousy in D.N.Angel although most recognize him from his role as everyone's favorite badass reasonable height-wise person Edward Elric in both anime adaptations of Fullmetal Alchemist. He's one of those guys that you just can't pigeonhole due to the diversity of his roles (though he frequently gets cast as characters who happen to be blond). Also happens to be quite the professional singer and songwriter, with several anime songs under his belt as well as a few albums. He also narrated and directed the infamous commercial for Sakura Con (GIRUGAMESH!).

On the live action side, Mignogna most notably spearheaded a Fan Sequel Web Video series to Star Trek: The Original Series called Star Trek Continues, where he took on the role of Captain Kirk himself. The project, boasting some pretty impressive production values, was well received by both Star Trek fans and critics alike, and praised for staying true to the style and spirit of original Trek, not least in the portrayal of Kirk; a performance which has proved to many that Mignogna's talents are not just limited to voice acting and that he can actually hold his own just fine in live action as well. In probable homage to this, Star Trek Online cast him as 23rd century Starfleet Captain Isaac Garrett in the Agents of Yesterday expansion.

Allegations of sexual harassment have followed Mignogna for decades, ultimately coming to a head in January 2019 after the release of Dragon Ball Super: Broly. Multiple stories of sexual harassment perpetrated by Mignogna on convention goers, convention staffers, and fellow voice actors went viral through various social media channels and news sites. Since then, Mignogna was recast in almost all ongoing roles and ceased receiving new ones. A defamation lawsuit was filed by Mignogna against several of his accusers and Funimation, but was dismissed by the courts for lack of merit.

Tropes about his roles:

Aaah! My poor vocal chords!
Some has stated that I should quit early because of the above. They are concerned with my vocal chords... But I refuse. One of the things that I, Vic Mignogna, likes to do is to find someone who thinks he's a hot shit and say "NO" right to their faces.