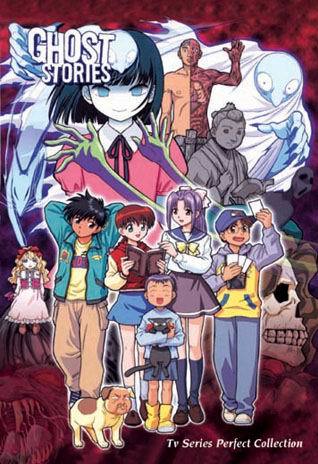 From left to right: Hajime, Satsuki, Keiichirou with Amanojaku, Momoko, and Leo.
Hajime: Drop the Krispy Kremes, Serpico! We need your help here!
Satsuki: The-people-in-my-house-look-like-my-father-and-my-brother-after-an-Eyemasters-exam-but-it's-not-
Hajime: Yeah-boogita-didggitda-googity-dig-dig-dig-tikikiti!Subtitled as... They're imposters! They wear glasses, but they don't have eyes!
—ADV Dub, "The Soul-Stealing Mirror!! Utsushimi"
Advertisement:

Ghost Stories (Gakkō no Kaidan, lit. "School Ghost Stories"), also known as Ghosts at School, is an anime series created in 2000 by Studio Pierrot and Aniplex for Fuji Television. Part of the Gakkou no Kaidan franchise of children's novels and films, the series was directed by Noriyuki Abe, who also directed YuYu Hakusho for Pierrot, and would later go on to helm Bleach, with music by Kaoru Wada.

The series tells the story of Satsuki Miyanoshita, who moves with her family to the hometown of her deceased mother, Kayako. On her first day of school, Satsuki, her brother Keiichirou, a first-grader, their neighbor Hajime Aoyama, Momoko Koigakubo, an older schoolmate, and Leo Kakinoki, a classmate and friend of Hajime's with a penchant for the paranormal, visit the Old School Building adjacent to the current school complex—and discover that the building is haunted.

The kids discover that Satsuki's mother was responsible for sealing away several ghosts who haunted both the school and the surrounding town, and now the ghosts are being released by the urbanization taking place in the surrounding area. Kayako also left her descendants a tool for just such an occasion: a book that details how to exorcise the ghosts once and for all. In her first confrontation, Satsuki faces a demon called Amanojaku—and Amanojaku ends up sealed within Satsuki's pet cat, Kaya. Although Amanojaku does not want to help Satsuki at first, the danger posed by the freed spirits soon threatens to envelop the town. Satsuki, her friends, and Amanojaku eventually agree to work together and stop the threat before the ghosts do any real damage.

When ADV Films acquired the license four years later, they were given free rein with the script, so long as the character names and basic plotlines remained intact.note The prevalent rumor is that the Japanese licensees told them to do whatever they can to sell the series in the states due to how poorly it did in Japan, but there are evidence that suggests

it didn't actually do that poorly and Steven Foster (the writer for the dub script) derailed the script either due to miscommunication or out of his own free will. The end result, recorded and released in 2005, was a highly irreverent and even more topical Gag Dub that satirized as many elements of early-to-mid-2000s politics and pop culture as possible, ranging from simple jabs at well-known celebrities to extended commentary on the prominence of the religious right during the George W. Bush administration.

In Southeast Asia, a different English dub of the series titled Ghosts at School aired on Animax. This dub stays true to the original Japanese version.

Discotek Media saved the license and re-released the series in 2014; it made sure to say upfront that the ADV dub would be included.note ADV's Gag Subs, which contained additional jokes, and special features explaining the urban legends behind each episode were left out of the original DVD re-release; the former were eventually re-implemented for their later upscaled Blu-ray release. The series is also viewable in both subbed and gag dubbed forms over on Crunchyroll.

Do not confuse this with a certain Coldplay album, the 1964 horror film, or the 2017 horror film by Andy Nyman.