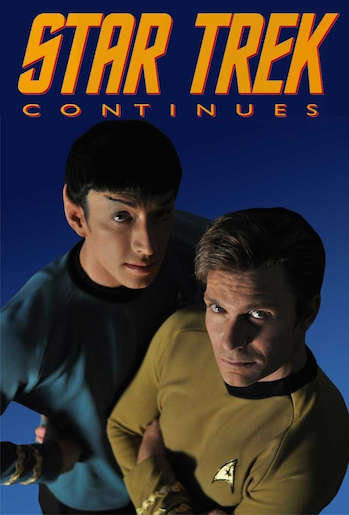 Left: Todd Haberkorn as Mr. Spock. Right: Vic Mignogna as Captain Kirk.
"You will continue to reach deeper into the stars. You will explore more new worlds. You will have the privilege of venturing further into the final frontier."
— James T. Kirk
Advertisement:

Star Trek Continues is a Fan Sequel web series set in the Star Trek universe. Its mission: to continue where Star Trek: The Original Series left off, and complete the final two years of the Five Year Mission of the Enterprise.

The cast is comprised of professionals in the film business who all also happen to be huge Star Trek fans. They are aiming to capture the spirit of the original series as accurately as possible while still creating new, high quality stories.

It can be accessed through the official site here

Since the series follows the crew of the original Star Trek: The Original Series, please refer to that page for most character tropes.