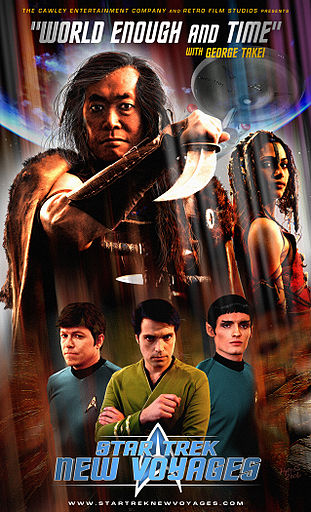 Star Trek: New Voyages (later renamed Star Trek: Phase II) is a fan-created webcast series created by James Cawley that is supposed to serve as a bridge between Star Trek: The Original Series and Star Trek: The Motion Picture.
Advertisement:

James Cawley plays the role of Captain James Kirk in what's supposed to be the fourth year of the Enterprise's original five-year mission. Starting with "Mind-Sifter", Brian Gross has taken over the role of Kirk.

To date, eleven episodes have been released - "Come What May" (the pilot episode) "In Harm's Way", "To Serve All My Days", "World Enough and Time", "Blood and Fire" (a two-part episode written by original series scribe David Gerrold), "Enemy: Starfleet!", "The Child" and "Kitumba" (both adapted from scripts written for the original Star Trek: Phase II series, the former of which became Star Trek: The Motion Picture.), "Mind-Sifter", and "The Holiest Thing". As the series has been discontinued mid-production, the episodes "Bread and Savagery" and "The Protracted Man" are in limbo.