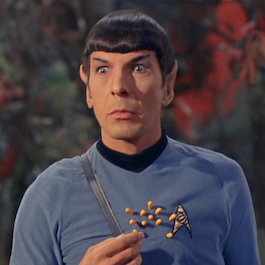 Not one of Spock's prouder episodes.
Advertisement:

Kirk and company beam down to Gamma Trianguli VI for exploration. It looks like a nice place with flowers and chirping birds and perfect weather. Then, a Redshirt gets a chest full of poisonous spines. Still, they must press on and explore. There is, for example, an alien village worth observing.

Another Redshirt bites the dust when a lightning bolt seems to strike at random. Yet another has the bad fortune to trip over an exploding rock. They have the feeling they're being watched and discover Akuta, the local priest, who seems shocked that anyone would react violently towards him. Akuta takes the remaining crew to his village, which seems to be a perfect Utopia, were it not for the social stagnation and sex being forbidden. All this is due to their worship of a strange god they call "Vaal".

While Spock and Bones debate over whether or not to let the natives have their silly superstition, things get personal when Vaal seizes the Enterprise, putting everyone aboard in grave danger. No more debate. Vaal must be destroyed, even if it means forcing the childlike aliens to grow up.