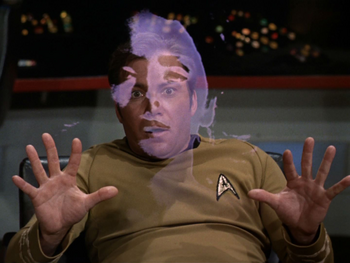 It's finally happened — the power of Shatner's ham has manifested as a spiritual force.
Advertisement:

The last episode of the original Star Trek series. It's known for being the most overtly sexist episode of the show and certainly not a worthy Series Finale, and many fans prefer to think of the previous episode, "All Our Yesterdays", as the true finale. Of course at that time an episode intended as a series finale was quite rare. But hey, it's not the last we'll be hearing from these characters.

Alternatively, you may regard it as the Star Trek version of Freaky Friday.

The Enterprise goes to some planet to rescue the two survivors of a doomed archaeological expedition. Dr. Arthur Coleman seems to be fine, but Dr. Janice Lester is unconscious. (One wonders if the writers forgot there used to be another "Janice" on this show or if they averted One-Steve Limit on purpose.) Shock of shocks, Dr. Lester turns out to be an ex-girlfriend of Kirk. After Kirk is left alone with her, she comes to and they chat about olden times. It becomes apparent that they had some serious Belligerent Sexual Tension going on back in the day.

Lester: Your world of starship captains doesn't admit women. It isn't fair.
Kirk: No, it isn't.

In any case, the idea that women can't be starship captains is never mentioned again, a female starship captain was seen in Star Trek IV, there was later an entire series about one, and both Enterprise and Discovery featured female captains predating this episode.

Janice Lester plugs Kirk into an ancient machine which causes a "Freaky Friday" Flip. Now in Kirk's body, Lester quickly reveals herself to be Ax-Crazy, supplying us with some of Shatner's trademark evil acting. Meanwhile, Lester's body is unconscious once more. Lester-in-Kirk prepares to kill Kirk-in-Lester, but the rest of the landing party walks in at the wrong moment. Lester, of course, pretends to be Kirk, beginning a Tyrant Takes the Helm plot. In Sickbay, Lester-in-Kirk meets with Dr. Coleman, with whom she is in cahoots. It's revealed that Lester murdered her expedition and Coleman was a willing accomplice. Man, does Kirk know how to pick 'em or what? After McCoy and a suddenly brunette Nurse Chapel arrive, Lester-in-Kirk announces that Kirk-in-Lester is being placed under the care of Dr. Coleman. McCoy protests that this violates Starfleet protocol since he is Chief Medical Officer, but Lester-in-Kirk ignores this. By the way, Lester-in-Kirk frankly talks about her scheme in Captains Logs. Does no one ever actually read those things? Even weirder, later we hear Kirk-in-Lester do the log, which makes even less sense.

After an escape attempt, Kirk-in-Lester is placed in solitary confinement. Spock visits and Kirk-in-Lester explains what happened. Spock performs a Vulcan mind meld (or at least a mind touch), which convinces him, but he notes that it won't count for anything in the way of evidence. Really? Freakin' telepathy isn't considered evidence of a body swap? Really? Granted, only Spock can sense it firsthand and he could lie, but... no wait, he can't lie because he's a Vulcan. What the hell?note Evidence obtained by telepathy is inadmissible in court because it's considered hearsay. Apparently this is still true in the 23rd Century. And Vulcans can absolutely lie, given a logical reason to do so. . . though what a "logical reason" would be in this case is unclear. Spock tries to help Kirk-in-Lester escape, but they're caught and Lester-in-Kirk has Spock charged with mutiny. At a court martial, Spock states his case. Kirk-in-Lester is then questioned in a very condescending, chauvinistic manner by Lester-in-Kirk. Kirk-in-Lester characterizes Lester as a Straw Feminist defined by "her intense hatred of her own womanhood". When Spock refuses to drop his charges, Lester-in-Kirk has a Villainous Breakdown and goes into a yelling tirade. Her new favorite word is "mutiny".

During a recess, McCoy and Scotty discuss the fact that Kirk is Not Himself and agree they'll have to move against him. This becomes an Engineered Public Confession, as the corridor was bugged (rare surveillance competence from Starfleet). Lester-in-Kirk decides she has the authority to pronounce a sentence of death for Spock, McCoy, and Scotty. Sulu and Chekov point out the death penalty is reserved for General Order 4note They probably meant General Order 7., but the Red Shirts are totes okay with this. When Lester-in-Kirk is back on the bridge, she and Kirk's essences briefly switch places again. Realizing the transfer is weakening, Lester-in-Kirk goes to Coleman and tells him to kill Kirk-in-Lester to ensure she won't go back into her own body. They set off to collect Kirk-in-Lester from the brig, but a scuffle ensues. In the midst of it, Kirk and Lester's essences slid back into their own bodies permanently.

Hey, you know how this episode has clearly portrayed Lester as an insane, power-hungry mass murderer? Well, forget about that. She's in a pretty body now and Females Are More Innocent. The episode wraps up with an Alas, Poor Villain ending, in which we learn Coleman was in love with Lester. (So he helped the woman he was in love with turn into a man? That could say a couple of things about him.) Kirk delivers the last line of the series: "Her life could have been as rich as any woman's, if only... if only..." The meaning of this line is debated almost as much as the one from earlier. Does "if only" mean "if only she kept to her proper gender role" or "if only society hadn't forced her into a gender role she hated"? Or both, perhaps? Make up your own mind.note And, of course, "if only" this series had been properly funded, had better writing this season, been given a better slot in the scheduling, and not been cancelled too soon.

This episode's title is a play on the title of Turnabout, a Thorne Smith body swap comedy about a husband and wife. For many years, it was a popular bit of Star Trek trivia that Sandra Smith (Dr. Lester) was the only person other than William Shatner to officially portray Captain Kirk. This remained true until 2009. In the world of fanfiction, Dr. Lester would find a niche in Slash Fic, her story providing a canon setup for Jumping the Gender Barrier. Slashers have also had a lot of fun imagining what Spock saw during that telepathic contact to convince him Kirk was in Lester's body.