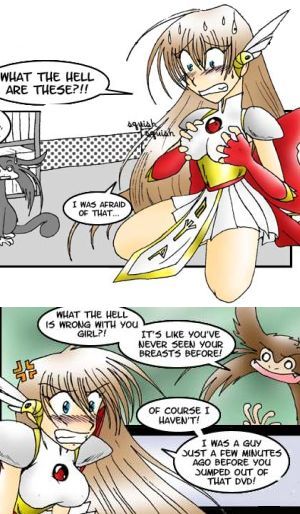 "If a man got turned into a woman, this is the first thing he would do."
— Ryou Tamura
Advertisement:

A specific example of Power Perversion Potential. Almost every time a male—and it is always a male—gets trapped in some kind of Gender Bender situation, the first thing the man turned woman does is check out the new equipment. In front of a mirror, if one is available. Often a form of Fanservice.

The character will engage in the following sequence of actions:

This may be related to the famous Five Stages of Grief: Denial, Anger, Bargaining, Depression and Acceptance. But with a greater focus on boobies.

Occasionally shortened to the simple:

Females-turned-male will almost never do the equivalent with their new equipment. That's partly because it's a lot more risque, and partly because male self-pleasuring isn't cool. Or maybe it's because All Women Are Prudes and thus disgust is far more expected, while on the other hand males-turned-female will engage in this trope even if they are horrified by the transformation to show that All Men Are Perverts. The less prudish females may exploit their new ability to pee standing up, though, but that's still the most the risky and sexual thing they will usually do.

Compare Showing Off the New Body (a completely different situation that results in similar behavior), Sweet on Polly Oliver (where a guy finds another "guy" attractive, with similar squick reactions pre reveal) and Breaking In Old Habits (where new hands are "tested out").

Trope Namer is a Shania Twain song, which has nothing at all to do with this trope.