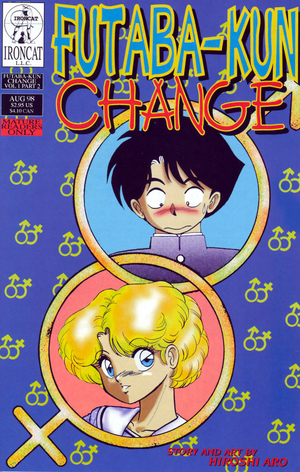 Futaba-kun Change! is a shonen manga series by Hiroshi Aro about Futaba Shimeru, a seemingly normal junior high school student who suddenly discovers that he is anything but normal.

To be more specific, Futaba is one day handed a girlie magazine by a fellow member of the wrestling club. Having snuck into the boys' room to read it, Futaba suddenly clicks on not just how girls are different from boys, but why it matters. And as he thinks of his good female buddy Misaki, his excitement increases — and suddenly Futaba finds himself possessed of female anatomy!

Some scary moments (and the discovery that the effect isn't permanent) later, Futaba gets home, only to find out that everyone in his family changes gender upon becoming aroused, and that the person he's always thought of as a father in fact was the one who gave birth to him!

Hilarity Ensues, as Futaba tries to start a romantic relationship with Misaki, deals with female anatomy issues, starts a new career as an "idol" and learns more about his/her family's heritage.

The manga was serialized in Monthly Shonen Jump from 1990 to 1997, and compiled into eight volumes. It was originally licensed in English by Studio Ironcat, but their release went out of print after they closed in 2006. As of January 2016, it is available in English on Kindle with a different translation.