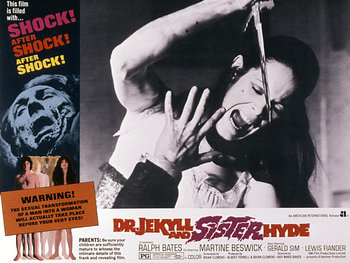 The dedicated Dr. Jekyll is attempting to find a cure for all disease. Realizing that this research could take longer than his natural lifespan, Jekyll derails into a search for an "elixir of life", some way of slowing the aging process. He hits upon human female hormones as a possible main ingredient, and early experiments seem to bear him out.

The problem now is that synthetic hormones don't exist yet, and no sane woman is going to volunteer to have her hormone-producing organs removed. So Jekyll turns to body snatchers Burke and Hare. Armed with his new supply, Jekyll develops his serum...but it has some side effects. When the body snatchers are put out of business, Jekyll must find yet another supplier for fresh female hormones, while dealing with some personal issues.

Trope in this film include: