Film / Hands of the Ripper 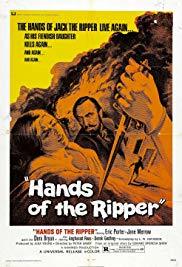 Hands of the Ripper is a 1971 British Hammer Horror Slasher Movie.

Anna is daughter of Jack the Ripper. After witnessing her father kill her mother as a small child, she's grown into a beautiful woman in the local orphanage. Unfortunately, she's developed a Split Personality based on her dad, and goes into murderous trances periodically. A psychiatrist takes her in in an attempt to treat Anna's problem, but things spiral out of control from there.

It was distributed theatrically in the US by Universal.