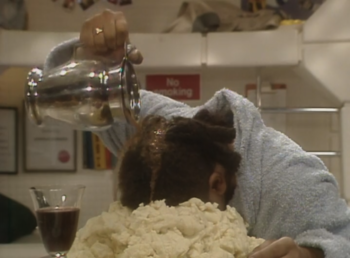 The Rimmer Diet: Great for indulgence, not so much for a healthy figure. Or scalp.
Advertisement:

One of the skutters goes mad and rewires the whole ship. This is bad news, because nobody knows what the autodestruct is hooked up to now. They have to refrain from using anything electronic, even a lightswitch, as Lister explains to Cat before ordering food from a vending machine.

In a desperate bid to save their lives, they swap Lister's brain with the dead first officer's to cancel it—which doesn't work, but it's all right because there's no bomb anymore, just the alarm. It gives Rimmer an idea, and that night he plants anxiety in Lister's head about his lifestyle of curries, cigarettes, and drinking. Lister agrees to swap bodies for a couple of weeks so that Rimmer can subject it to a regimen of diet and exercise.

What follows is twenty minutes of gluttony, hypocrisy, and actors pretending to be each other pretending to be their characters as Rimmer subjects Lister's body to a hedonistic hell of food, wine, and cigars. When Lister cuts it short and switches back, Rimmer has Kryten chloroform him, swap back, and then takes Starbug out to continue his bacchanal for another month at least. Lister, Cat, and Kryten pursue, but in the chase Starbug crashes.

Back aboard Red Dwarf and in the right bodies, Lister catalogues all the awful things Rimmer has done through both crash injuries and his general abuse as Kryten bemoans his guilty conscience. In walks Rimmer, stiff as a board—and then Cat a moment later, with an enormous plate of food, speaking with Rimmer's voice before shoving his face into it again. Roll credits.