Manga / Your and My Secret 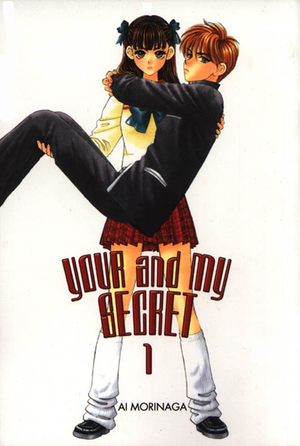 Your and My Secret is a comedy manga by Morinaga Ai, of My Heavenly Hockey Club fame. It was serialized from 2001 to 2011 in various magazines (starting out in Monthly Stencil, then Monthly Comic Blade, and finally in Monthly Comic Avarus).

It stars a violent tomboy by the name of Momoi Nanako, and a shy boy by the name of Uehara Akira who has a crush on her. So far, normal enough. When Akira drops by her house to deliver some handouts from school, he gets mixed up in an experiment that Nanako's Mad Scientist grandfather was performing on her. When the smoke clears, they discover that Nanako and Akira have swapped bodies. Of course, they also discover that the machine that did it is trashed, and it's going to be neither cheap nor quick to get it fixed... not that Nanako's grandfather seems to be in any hurry to work on it.

For a variety of reasons Akira isn't very happy with the situation, but Nanako decides to have a bit of fun with it while they wait for the bodyswap machine to be fixed. They keep it a secret from everyone they know, but such major changes in their personalities certainly don't go unnoticed... fortunately, everyone involved (aside from Akira) sees it as change for the better and don't ask questions.

It has been adapted into a live-action movie.